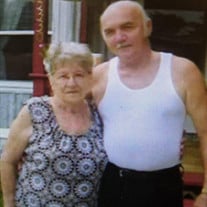 Gracie Wonetta Goodrich, daughter of the late William Marion and Elva Mae (Myers) Exendine, was born May 1, 1927 in Oklahoma and passed away Friday, May 21, 2021 in her home near Waynesville, Missouri having attained the age of 94 years. As a young child, Gracie and her family moved to Pulaski County to the Turkey Ridge area where she attended school. As a young lady, she met a young man by the name of Glen Alfred Goodrich. He was the son of the late Fredrick and Dorothy (Powell) Goodrich and was born on November 2, 1943 in Niagara Falls, New York. Glen entered the United States Army and served his country faithfully until his honorable discharge on December 31, 1968. Gracie and Glen began dating and on December 17, 1972, they were united in marriage in Laquey, Missouri. They shared over 48 years of marriage together before Glen preceded her in death on February 5, 2021. He had attained the age of 77 years. Gracie and Glen lived all of their married life in the Turkey Ridge area except for a few short years they spent in Kansas City, Missouri. Glen continued to serve his country on Fort Leonard Wood as a cook in the mess hall and Gracie tended bar at several different locations during her working years. Gracie and Glen both enjoyed being outdoors. You could find Gracie either working in her yard or with her flowers. They both loved their children and grandchildren tremendously and always looked forward to spending time with them. Gracie also loved her dogs and spoiling them. Glen was a member of the Veterans of Foreign Wars and American Legion and Gracie was a member of each of the auxiliaries with those posts. Gracie and Glen will be sadly missed, but fondly remembered by all those that knew and loved them. They leave to cherish their memory, three children: Leo Martin (Pat) of Waynesville, MO, Melva Barousse (Ricky) of Ft. Hood, TX, and Barbara Martin of Waynesville, MO; ten grandchildren; twenty-one great-grandchildren; three great-great-grandchildren; Gracie’s brother: Homer Exendine of Waynesville, MO; Glen’s two brothers: Roy Lawrence Goodrich (Christie Gail-Storey) of Niagara Falls, NY and Wayne Frederick Goodrich of New York; a number of nieces, nephews, as well as a host of other relatives and friends. Funeral services were held Wednesday, May 26, 2021 at 2 p.m. in the Memorial Chapel of Richland. Burial followed in the Centerpoint Cemetery near Richland, under the care and direction of Memorial Chapel of Richland. Memorial contributions in memory of Gracie Goodrich may be made and left at the funeral home.

Gracie Wonetta Goodrich, daughter of the late William Marion and Elva Mae (Myers) Exendine, was born May 1, 1927 in Oklahoma and passed away Friday, May 21, 2021 in her home near Waynesville, Missouri having attained the age of 94 years.... View Obituary & Service Information

The family of Gracie Wonetta Goodrich created this Life Tributes page to make it easy to share your memories.