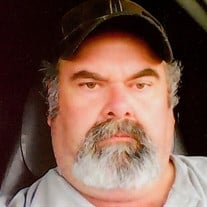 Gregory Alan Davis, son of Charles Everett and Neva Marie Ledbetter Davis was born September 27, 1965 in Waynesville. Missouri. He departed this life on August 31st, 2015 in Miami, Oklahoma at the age of 49. Greg grew up in Swedeborg, Missouri, attending Swedeborg Elementary School and then attended High School in Richland, Missouri. Greg made friends easily and enjoyed visiting with them often. Greg enjoyed fishing, boating, driving a truck and anything with an engine. Greg graduated from Richland High School in 1983 and went to work with his brother Johnny, building cabinets. Soon after Greg found his true passion as he became an over the road truck driver. He had many great stories about his time on the road. He drove for several trucking companies and at the time of his passing he was working for Proffer Produce. Greg had a love for boating, fishing and telling jokes. Greg loved to play the guitar and sing, often improvising and adding his own lyrics with each song. He could hear a song and pick up his guitar and play it without hesitation even though he had never had a music lesson. He had the gift of gab and could talk to anyone about anything. Greg enjoyed spending time on the lake with family and friends, loved family gatherings and sharing stories about his trucking experiences. Greg loved being a truck driver and enjoyed each trip he took, always taking time to stop and see new scenery and meeting the people. Greg’s pride and joy was his son, Tyler and his daughter, Tori, as he loved to tell anyone who would listen just how talented and smart that they were. Greg is survived by one son: Tyler Davis of Richland, MO; one daughter: Tori Davis of Richland, MO; one sister: Shirley Keasling of Granite City, IL; two brothers: Avery (Diane) Davis of Counce, TN and John (Margaret) Davis of Crocker, MO; several nieces, nephews, cousins as well as many friends. A memorial service for Gregory Davis will be held at Swedeborg Christian Church on Saturday, September 12, 2015 at 12:00 p.m. In lieu of flowers, the family requests donations be made to a memorial fund for the family of Greg Davis.

Gregory Alan Davis, son of Charles Everett and Neva Marie Ledbetter Davis was born September 27, 1965 in Waynesville. Missouri. He departed this life on August 31st, 2015 in Miami, Oklahoma at the age of 49. Greg grew up in Swedeborg,... View Obituary & Service Information

The family of Gregory Alan Davis created this Life Tributes page to make it easy to share your memories.