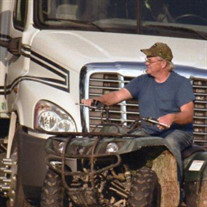 Gregory Keith Kramer was born on February 26, 1956, in Fort Leavenworth, Kansas, to SSgt Bernard Kramer and Agnes (Kissinger) Kramer. He passed away peacefully at his home on February 29, 2020, surrounded by his family. Greg, perhaps better known as “Birdy” or simply Papa, grew up in France, Colorado, Washington, and New Mexico, before his family made their way to Missouri where he graduated from Richland High School in 1975. Birdy spent his professional life behind the wheel of a diesel, working for Zeigenbein Livestock Hauling, Playcraft Charger, and Carmeco, the latter of which he was proud to call his work family for over 30 years and where his son, Ben, now carries on his legacy of hard work. In 1982, Greg and Christy (Sanders) married and they spent 38 wonderful years together, raising three children – Samantha, Lacie, and Ben. Papa also leaves behind six adoring grandchildren – Madison, Jude, Zoe, Tildey, Darcy, and Elizabeth. Over the 38 years we were so lucky to have had with our steadfast rock, he rarely, if ever, missed a soccer, basketball, or baseball game if his kids or grandkids were in the field or on the court. He coached his grandchildren’s basketball team and when Ben took to stock car racing, he was the best Crew Chief a driver could’ve asked for. Our family will forever miss our patriarch, though we take comfort in the life he lived, the truths he taught us, and the immense and indescribable grace and fight he showed at the end of his life. He was unflinchingly reliable, especially hilarious, endlessly forgiving, humbly but so deeply good, and unquestionably devoted to his family, above all else. “It is what it is,” as he would say, and we go on with that in mind and full hearts knowing that we were blessed to have had him while we did. Funeral services were held at 3:00 p.m. Wednesday, March 4, 2020 in the Memorial Chapel of Richland with Billy Williams officiating. Sally Belshe read Psalm 23 and Samantha Kramer recalled her memories of her father. The song “I’ll Fly Away” was played. Serving as escorts were John Gan, Wayne King, Terry Richardson, Larry Baranowski, Jack Eldridge, John Jackson and William Longnecker. Burial followed in the Oaklawn Cemetery of Richland. Memorial contributions in memory of Gregory Kramer can be left at the funeral home.

Gregory Keith Kramer was born on February 26, 1956, in Fort Leavenworth, Kansas, to SSgt Bernard Kramer and Agnes (Kissinger) Kramer. He passed away peacefully at his home on February 29, 2020, surrounded by his family. Greg, perhaps better... View Obituary & Service Information

The family of Gregory Keith Kramer created this Life Tributes page to make it easy to share your memories.