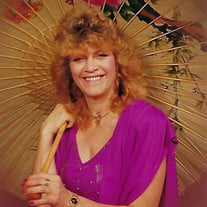 Gwendolyn Louise Marsh, daughter of the late Edgar L. Marsh and Lueeda (Kiefer) Marsh, was born January 4, 1949 in Oklahoma City, Oklahoma. She passed away Sunday, November 4, 2018 in her home having attained the age of sixty-nine years. Gwendolyn grew up in Oklahoma City before the family moved to Illinois. She was later blessed with three sons: John, Don and Richard. For most of her life, Gwendolyn took care of others as a home health caregiver. She made the end of life transition easier and joyful for them. It was back breaking work, but she thrived on it and brought love to her patients. In her spare time, Gwendolyn enjoyed making quilts for her family and spent hours with her mom making those quilts. She was a great cook and loved to cook for her family and friends. She was an animal lover and took in many strays. Gwendolyn loved her family dearly and treasured every moment she could spend with them. Gwendolyn leaves to cherish her memory, two children: Don Kernagis (Diane) of Brookston, IN and Richard Wise (Anne) of Hillsboro, TN; nine grandchildren: Mamie Kernagis, Paula Kernagis, John M. Kernagis II, Nick Kernagis, Hannah Kernagis, Kayla Dinkelmann, Britney Wise, Alyssa Rodrigues and Gabe Wise; one great grandchild: Harrison Burke; one sister: Shirley Marsh of Atlantic Beach, FL; many nieces, nephews, other relatives and friends. In addition to her parents, Gwendolyn was preceded in death by one son: John Edward Kernagis and two granddaughters: Willow Wise and Ashlee Kernagis. Even though she is gone from our sight, her memory will live on in our hearts. Services were held at 12:00 p.m. Wednesday, November 7, 2018 in the Memorial Chapels and Crematory of Waynesville / St. Robert with Pastor Danny Graves officiating. Pastor Graves also sang “Amazing Grace” and the songs “Where the Roses Never Fade” by Cristy Lane and “Old Rugged Cross” by Alan Jackson were played. Inurnment was held at Skyline Memorial Park Cemetery of Monee, Illinois. Memorial contributions may be made in memory of Gwendolyn Marsh and may be left at the funeral home.

Gwendolyn Louise Marsh, daughter of the late Edgar L. Marsh and Lueeda (Kiefer) Marsh, was born January 4, 1949 in Oklahoma City, Oklahoma. She passed away Sunday, November 4, 2018 in her home having attained the age of sixty-nine years.... View Obituary & Service Information

The family of Gwendolyn Louise Marsh created this Life Tributes page to make it easy to share your memories.