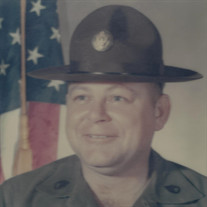 H.L. “Hank” Heinitz, son of the late Henry and Beulah E (Massey) Heinitz, was born August 10, 1939 in Kansas City, Kansas and graduated from Wyandotte High School in 1957. Hank was married and was blessed with one son, Rick. At the age of 27, Hank was drafted into the United States Army during Viet Nam and made a career of the service. He served as a drill sergeant and then with the Combat Engineers. For his faithful service, Hank received several awards and commendations; some of which include: National Defense Service Medal, Vietnam Service Medal with 3 Bronze Service Stars, Republic of Vietnam Gallantry Cross Unit Citation with Palm, Vietnam Campaign Medal, Meritorious Unit Commendation, Presidential Unit Citation, Army Commendation Medal with Oak Leaf Cluster, Army of Occupation Medal, Bronze Star Medal, Noncommissioned Officer Professional Development Ribbon, Drill Sergeant Identification Badge, Army Good Conduct Medal-6th Award, Army Service Ribbon, Overseas Service Ribbon 2nd Award and Sharpshooter Qualification Badge M16. Hank retired in 1987 having earned the rank of Sergeant First Class. After retiring, Hank moved to Florida where he lived for 9 years before moving back to the Kansas City, Kansas area to be close to his son. While being stationed at Fort Leonard Wood during his military career, Hank enjoyed living in this area, so he decided to move back to the area after living in Kansas City for 5 years to be close to old friends that he had met while in the military. In his spare time, Hank enjoyed being outdoors while golfing, hunting or fishing. He also loved to read and had a set of leather bound Louis L’Amour books. He also liked to watch auto racing. He was a member of the Ozark Memorial VFW #3176 of St. Robert, American Legion of St. Robert and the American Veterans (AmVets). He attended Hickory Hills Baptist Church of St. Robert, Missouri. Hank passed away Friday, February 12, 2016 in his home in St. Robert, Missouri having attained the age of 76 years. He will be sadly missed by all those that knew and loved him. Hank leaves to cherish his memory, one son: Rick Heinitz of Overland Park, KS; one sister: Barbara Higgins of Overland Park, KS; one grandson: Sam Thomas Heinitz; a number of nieces, nephews, as well as a host of other relatives and friends. Services were held at 10:00 a.m. Tuesday, February 16, 1026 in the Memorial Chapels and Crematory of Waynesville / St. Robert with Chaplain Tyger officiating. Inurnment with military honors followed in the Missouri Veterans Cemetery of Waynesville. Military honors were provided by the United States Army of Fort Leonard Wood, Missouri.

The family of H.L. Hank" Heinitz created this Life Tributes page to make it easy to share your memories.