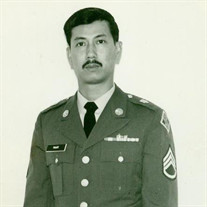 SFC (Ret) Han Shaing Mar, son of the late Tick Pon Mar and Oi Ling Mar, was born November 26, 1938 in Canton, China. As a young boy, Han grew up in Wichita, Kansas where he graduated from high school. Shortly after graduating, Han entered the United States Army and served his country faithfully until his retirement in May 1985. He did 2 tours in Vietnam and 4 tours in Germany and had attained the rank of Sergeant First Class. For his faithful service, he earned several awards and commendations. On June 1, 1974, Han was united in marriage to Patsy Dettmer. They shared over 42 years of marriage together and were blessed with two children: Steven and Jennifer. After retiring from the military, Han was employed for 25 years at EDP on Fort Leonard Wood and continued to work until his health began to decline. In his spare time, Han enjoyed playing with his grandchildren, hunting and was a wonderful cook for all of his family. Han passed away Friday, February 3, 2017 in St. Charles, Missouri having attained the age of 78 years. He will be sadly missed, but fondly remembered by all those that knew and loved him. Han is survived by his wife: Patti Mar of St. Robert, MO; one son: Steven Mar and wife Pam of Waynesville, MO; one daughter: Jennifer Mar of St. Robert, MO; one sister: Sue Mar of Oklahoma City, OK; three grandchildren: Colin Mar, Alyssa Mar and Blake Mar, all of Waynesville, MO; other relatives and friends. In addition to his parents, Han was preceded in death by one granddaughter, Kaylee Lynn Mar. Graveside services were held at 2:00 p.m. Monday, February 6, 2017 in the Sunset Memorial Estates Cemetery of Waynesville with Jack R. Crocker officiating. Military honors were provided by the United States Army of Fort Leonard Wood, Missouri. Services were under the direction of Memorial Chapels and Crematory of Waynesville / St. Robert. Memorial contributions may be made in memory of Han Mar and may be left at the funeral home.

The family of SFC (Ret) Han Shaing Mar created this Life Tributes page to make it easy to share your memories.