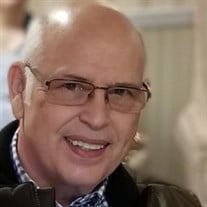 Hansel Morris Williams, son of Ernest G. and Hallie Virginia (Adair) Williams, was born November 22, 1943, in Cuba, Missouri. He departed this life Friday, August 6, 2021, in St. Mary’s Hospital, in Jefferson City, Missouri, at the age of seventy-seven years, eight months and fourteen days. On May 9, 1964, he was united in marriage to Lois Jean Souders, and they shared fifty-seven years together. Two children were born to this union, Tami, and Darrin. He was preceded in death by his parents; his daughter, Tami Hoskins; and two sisters, Florence Chapman, and Rosemary Ross. Morris is survived by his loving wife, Lois of the home; his devoted son, Darrin Williams (Deanna) of Columbia, Missouri; his son-in-law, Keith Hoskins of Columbia, Missouri; five grandchildren, Ashley (Steve), Jeffery, Kristopher, Nathan, and Matthew; six great-grandchildren, Dakota, Ayden, Oliva, Julian, Angelica, and Juniper; his brother, James Williams of Ft. Myers, FL; his brother-in-law, Ralph Souders (Phyllis) of Steeleville, Missouri; three special cousins, Marge, Betty, and Kathy; a number of nieces and nephews; as well as a host of other relatives and many friends. He was born and raised in Cuba, Missouri where he attended Holy Cross School and Cuba Public Schools. In earlier years he had worked as a Pin Setter at the Cuba Bowling Alley, at Deb’s Shoe Company, and at Custom Printing as a Plate Maker. In 1985 he and Lois started their funeral home Pre-need sales career. They had worked for several funeral homes in the area before starting at Waynesville Memorial Chapel, where they served helping families for twenty-nine and a half years. Morris had professed his faith in Jesus Christ and was a faithful member of Concord Baptist Church in Jefferson City, Missouri. His Lord, faith, church, and church family were a very important part of his life. He loved his family dearly. His devotion to Lois, his children, and grandchildren were apparent in his daily walk. Spending time with the kids, laughing, sitting, and playing, working a project together, or taking a walk was so special to him. He was the Best Grandpa Ever! His smile, laughter, and sense of humor were contagious. In his spare time, he enjoyed wood working, model trains, computers, and keeping his tech skills sharp. He was a man with many attributes. His devotion to family, great work ethic, and never-ending faith in Jesus Christ were qualities he lived by and a legacy he leaves for those who loved him. Morris will be fondly remembered and greatly missed by all those who knew him. We celebrate his life and cherish the memories he created for his family and many friends. He will live on in our hearts forever. Services were held at 11:00 A.M., Wednesday, August 11, 2021, with Pastor Monte Shinkle officiating. Pastor Manuel Seaton, a long-time beloved family friend shared fond memories about Morris. Soloist, Robin Widner sang “What A Day That Will Be.” The group, Singing Disciples sang “Till the Storm Passes By” and “I Know a Man Who Can.” All performers were dear friends to Morris and Lois. Serving as escorts were his loving family, Ashley, Keith, Kristopher, Nathan, Steve, and Matthew. Burial followed in the Memorial Park Cemetery, Columbia, Missouri. Services were under the care and direction of Memorial Chapel of Waynesville/St. Robert. Memorial contributions can be made in memory of Morris Williams may be left at Concord Baptist Church or mailed to Memorial Chapel, 202 Historic 66 West, Waynesville, MO 65583. Online condolences can be sent at www.memorialchapelsandcrematory.com

The family of Hansel Morris Williams created this Life Tributes page to make it easy to share your memories.