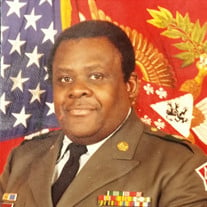 SSG (Ret) Harold Jones, son of the late William Henry and Ilonia Byrd, was born March 25, 1941 in Fayetteville, Georgia where he grew up and graduated from high school. For a time, Harold lived in California and worked. At the age of 39, he enlisted in the United States Army and served his country faithfully until his retirement in 1991. He had attained the rank of Staff Sergeant and earned several awards and commendations; some of which include: National Defense Service Medal, Army Service Ribbon, Republic of Vietnam Cross of Gallantry w/Palm, Vietnam Service Medal-3, Vietnam Campaign Medal, Army Commendation Medal-3, Army Good Conduct Medal-6, Noncommissioned Officer Professional Development Ribbon-3, Expert Qualification Badge M-16 Rifle, Overseas Service Ribbon-6 and Meritorious Service Medal. On April 24, 1980, Harold was united in marriage to Chong Sun Han in Seoul, Korea. They shared over 34 years of marriage together and were blessed with two children: Cheryl and William. After retiring from the military, Harold was able to do more of what he enjoyed. He loved being outdoors; whether it was caring for his lawn, fishing or camping. He was a lifetime member of the Ozark Memorial VFW #3176 in St. Robert and also served as the JR/Vice Commander. The one thing that Harold was more proud about than anything was his children and their accomplishments. You could hear him bragging to everyone he met about his kids. Harold was a hard worker. He was always upbeat, never met a stranger and was very much a people person. He loved visiting with people and encouraging them along the way. He will be greatly missed by all those that knew and loved him. Harold passed away Monday, December 29, 2014 in his home having attained the age of 73 years, 9 months and 4 days. Harold leaves to cherish his memory, his wife, Chong Sun Jones of the home; two children: Cheryl Jones of Dallas, TX and William Jones of San Diego, CA; one brother: Chandler Jones of Atlanta, GA; one sister: Lena Weston and husband John Calvin of Fayetteville, GA; several nieces, nephews, other relatives and friends. Services were held at 2:00 p.m. Friday, January 2, 2015 in the Memorial Chapels and Crematory of Waynesville / St. Robert with Chaplain (CPT) Vince Bain officiating. The songs “Amazing Grace” and “Precious Lord, Take My Hand” were played. Serving as escorts were the United States Army. Burial with military honors followed in the Missouri Veterans Cemetery of Waynesville. Military honors were provided by the United States Army of Fort Leonard Wood, Missouri. Memorial contributions may be made in memory of Harold Jones and may be left at the funeral home.

SSG (Ret) Harold Jones, son of the late William Henry and Ilonia Byrd, was born March 25, 1941 in Fayetteville, Georgia where he grew up and graduated from high school. For a time, Harold lived in California and worked. At the age of... View Obituary & Service Information

The family of SSG (Ret) Harold Jones created this Life Tributes page to make it easy to share your memories.