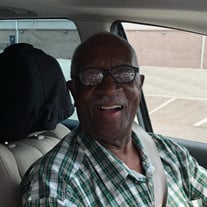 Harold Mallory, son of the late Cobie "Ted" and Sarah (Fomby) "Mabelle" Mallory, was born January 16, 1939 in Birmingham, Alabama where he grew up and graduated from Westfield High School in May 1957. As a young boy Harold made a profession of his faith and was a member of Bethel Baptist in Westfield, Al. under the leadership of Rev. Davis. On April 2, 1961, Harold was united in Holy Matrimony to Ethel "Mickey" Banks and they shared many wonderful years and fond memories together. During this union they were blessed with three beautiful children: Renee, Darryl and Monika. Harold had a few careers which he held, one specific, he was employed by a Drs. office delivering medical supplies, until he joined the US Army in 1962. Harold proudly served his country with tours to Schofield Barracks, Hawaii, Okinawa, Japan, Stuttgart, Germany to mention a few until he retired in Fort Leonard Wood, Missouri in 1985. In 1986 Harold went to work for the Mo Department of Corrections and served there until his retirement in 2010. In 2011 he was employed by EDP Services on Ft. Leonard Wood as a Head Count clerk until he could no longer serve in that position due to illness. One thing that Harold love to do was work and take care of his family. He touched many lives with his kind and gentle personality and his infectious smile. Harold was a sports fanatic and he enjoyed playing basketball, through him playing in a league, he was giving the nickname "SLY" because he was able to maneuver on the court. Once Harold decided to retire from playing basketball, he then decided to referee and umpire basketball and softball games. Most importantly Harold loved his family and his grandchildren and spending as much time with them as he could. Harold transitioned from this earth on Monday, February 24th, 2020, in University Missouri Hospital, Columbia, MO with his wife by his side, living to the age of 81 years. Harold was preceded in death by his parents Cobie and Mabelle Mallory, mother and father in law David and Elgertha Banks, 3 sisters Beatrice James, Ruth Harrell and Margie Fowler, 3 brothers Warren, Ted "TJ", Larry Mallory and one grandson Antonio Demetrius "Meat' Dent. Harold leaves to cherish his loving memories, his wife Ethel "Mickey" of the home and three children, Renee Mallory of Durham, NC, Darryl Mallory of Fulton, MO, Monika Mallory of Waynesville, MO. Ivory (Sue) Mallory, Lesley Mallory of Milwaukee, Wisconsin, Willadene Mallory of Phoenix, AZ. sister-in-law Patricia (Johnny) Hinton of Birmingham, Al. Harold also had seven grandchildren, twelve great grandchildren, a host of nieces, nephews, relatives and friends. Services were held at 12:00 p.m. Friday, March 6, 2020 in the Memorial Chapels and Crematory of Waynesville / St. Robert with Pastor Michael C. Bradford officiating. Soloist Nicole Waters sang “His Eye Is on the Sparrow” and “Encourage Yourself” and Pastor Willie “Shockie” Thornton sang “My Soul Has Been Anchored”. Diana Singleton read Scripture from the Old and New Testament and Ruby Riley read the condolences and acknowledgements. Serving as escorts were the United States Army. Serving as honorary escorts were Mark Dunseith, Steve Bratton, Quinton Martin, Denton “Mr. D” Hurst, Carlus Gerald, De’Shawn Dent, Claudell Haggard and Demetrius Mallory. Serving as honorary flower girls were Keiyonda Crowder, Deriyona Haggard, Syniah Garland, Connie Dunseith, Diana Singleton, Lenette Tidwell and Amina Gerald. Burial with military honors followed in the Missouri Veterans Cemetery of Waynesville. Military honors were provided by the United States Army of Fort Leonard Wood, Missouri. Services were under the direction of Memorial Chapels and Crematory of Waynesville / St. Robert. Memorial contributions may be made in memory of SSG (Ret) Harold Mallory and may be left at Memorial Chapels and Crematory of Waynesville / St. Robert.

Harold Mallory, son of the late Cobie "Ted" and Sarah (Fomby) "Mabelle" Mallory, was born January 16, 1939 in Birmingham, Alabama where he grew up and graduated from Westfield High School in May 1957. As a young boy Harold made a profession... View Obituary & Service Information

The family of SSG (Ret) Harold Clyde Mallory created this Life Tributes page to make it easy to share your memories.