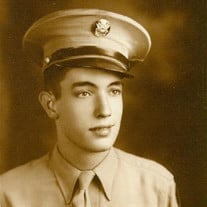 Harold Eugene Melton, son of the late Dotson Woodson and Ruth Irene (Jenkins) Melton, was born November 28, 1925 in St. Louis, Missouri. As a young boy, Harold and his family moved to the Edgar Springs area and he graduated from Rolla High School. Shortly after graduation, Harold was drafted into the United States Army to serve during World War II and he did his basic training at Fort Leonard Wood and was then shipped to Germany. Once in Germany, he fought in General Patton’s Third Army and became a prisoner of war. Harold met the love of his life, Lillian Marlene George, while she worked for his mother Ruth. They were united in marriage on November 28, 1951 in Corinth, Mississippi and shared 55 years of marriage together. They were blessed with three children, Michael, Mark and Tammy. Lillian preceded Harold in death on December 14, 2006. Harold spent the majority of his working years as a self-employed painting contractor. He worked for the Department of Revenue in the license office for 13 years and retired in 1991. In his spare time, Harold enjoyed being outdoors. You could find him either on the golf course or out fishing. He was good at any sport. For example, he tried out for the St. Louis Browns baseball team and also earned many trophies in archery in his younger days. Harold was an avid St. Louis Cardinal fan. He would watch them on TV and listen on the radio as well. He also was a member of several of the local bowling leagues. Harold enjoyed visiting with his friends at the local coffee shop and telling stories. Most importantly, he loved spending time with his family especially with his grandchildren. At an early age, Harold made a profession of faith and was baptized. He was a member of Westside Baptist Church of Waynesville and attended every chance he could until his health began to decline. Harold went home to be with his Lord Monday, February 2, 2015 in the Missouri Veteran’s Home of St. James, Missouri having attained the age of 89 years. Harold leaves to cherish his memory, his three children: Michael Melton of Waynesville, MO, Mark Melton of St. Peters, MO and Tammy Howlett (Russ) of Crocker, MO; six grandchildren: Jarod Howlett (Melissa), Jessica Shempert (Mike), Joseph Howlett (Tracy), Christopher Melton, Kayla Melton and Michael James Melton (Melissa); ten great grandchildren; other relatives and friends. In addition to his parents and wife, Harold was preceded in death by two sisters, Martha Adcock and Freida Craine. Funeral services were held at 11:00 a.m. Saturday, February 7, 2015 in the Memorial Chapels and Crematory of Waynesville / St. Robert with Rev. Lindell Shelden officiating. Family friend, Eric Foster, gave a beautiful eulogy about Harold’s life. Becky Lercher accompanied Mike Freeman as he sang “O Come Angel Band”, “Precious Memories” and “When We All Get to Heaven”. The song “Milky White Way” as performed by Elvis Presley was played. Serving as escorts were Tim Foster, Terry Foster, Michael James Melton, Mike Shempert, Jarod Howlett, Anthony Foster, Eric Foster, Jon Foster and Joseph Howlett. Burial with military honors followed in the Sunset Memorial Estates Cemetery. Military honors were provided by the United States Army and the Dixon American Legion Post. Memorial contributions may be made in memory of Harold Melton to the St. James Veteran’s Home and may be left at the funeral home.

Harold Eugene Melton, son of the late Dotson Woodson and Ruth Irene (Jenkins) Melton, was born November 28, 1925 in St. Louis, Missouri. As a young boy, Harold and his family moved to the Edgar Springs area and he graduated from Rolla High... View Obituary & Service Information

The family of Harold Eugene Melton created this Life Tributes page to make it easy to share your memories.