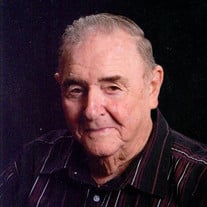 Harold “Pud” Dean Woody, son of the late Robert Harding and Hazel Mae (Allman) Woody, was born August 13, 1933 in Cookville, Missouri. He went home to be with his Lord Friday, June 10, 2016 in his home having attained the age of 82 years. Harold grew up in the Waynesville and Buckhorn area and joined the Air Force in 1952. He served his country faithfully until his retirement after 20 years of service. For his service, he earned several awards and commendations and earned the rank of Tech Sergeant. While in the military, Harold met a young lady in Springfield, Massachusetts by the name of Judith Margaret Heyes, who was the love of his life. They were united in marriage on August 25, 1956. They shared over 59 years of marriage together and were blessed with three children: Cynthia, Robert and Roy. After retiring from the military and returning home, Harold worked as a civil service employee for nine years before owning and operating his own business, Woody & Sons, which was a heating, cooling and ice business. He operated the business for over 20 years. In his spare time, Harold loved to travel and take adventures with Judy. They were “snow birds” during the winter months and enjoyed traveling in the RV. He enjoyed building and showing classic cars and was a charter member of the Cave State Cruisers. Harold was also a member of the Waynesville Masonic Lodge #375 AF & AM, past Rajah of the Pulaski County Shrine Club and member of the Scottish Rite-Valley of Joplin. Harold’s pride and joy was his family and friends. He had a wonderful sense of humor and could tell a good story. He loved spending time with his family, especially the grandkids. As a young man, Harold made a profession of faith and was a member of the Crocker Christian Church where he and Judy attended faithfully until his health began to decline. Harold will be sadly missed, but fondly remembered by all those that knew and loved him. He leaves to cherish his memory, his wife: Judy Woody of the home; one daughter: Cindy Grizzell and husband Jess of Waynesville, MO; two sons: Robert Woody and wife Barbra of Laquey, MO and Roy Woody and wife Patty of Fairbanks, AK; one brother: James Woody of Bethalto, IL; one sister: Mary Sue Murphy of Sunrise Beach, TX; eight grandchildren; six great grandchildren; numerous nieces, nephews, other relatives and friends. In addition to his parents, Harold was preceded in death by one granddaughter: Angela Cirks; one great granddaughter: Hannah Saulsbury; and two brothers: William R. and Robert D. Woody. Graveside services with military honors were held at 11:00 a.m. Monday, June 13, 2016 in the Missouri Veterans Cemetery of Waynesville with Pastor Larry Richardson officiating. Soloist Becky Lercher sang "Amazing Grace" and "Because He Lives" and the song "On the Wings of a Dove" by Ferlin Husky was played. Military honors were provided by the United States Air Force of Whiteman Air Force Base. Memorial contributions may be made in memory of Harold Woody to the Crocker Christian Church and may be left at the funeral home.

The family of Harold "Pud" Dean Woody created this Life Tributes page to make it easy to share your memories.