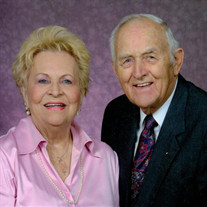 Harold Leroy Wells, 86, of Springfield, MO, (formerly of Devils Elbow, MO) died March 2, 2015. Harold, son of Squire A. and Anna F. (Krafczik) Wells, loving husband of Nyda Marie (Bench) Wells, passed away on March 2 at the Jordan Creek Nursing Facility in Springfield, MO. He is survived by his wife, Nyda, one son Andrew (Tara) Wells, and six of Nyda’s children: Nancy Dunn of Springfield, Bob (SueAnn) Dunn of Devils Elbow, Tricia (Eric) Headley of Springfield, Tom (Faith) Dunn of Devils Elbow, Tim (Laurie) Dunn of Rolla, and Susan Dunn of Kansas City, MO. He is also survived by grandsons Eli Wells, Isaac Wells, Joshua O’Riley, Brady Rick, Travis Dunn, Lucas Dunn, Derek Dunn, Aaron Headley, Patrick Dunn, Corey Dunn, and granddaughters Robbie Rick, Makenna Headley, Mia Headley, Meisi Headley, Melanie Burns, Kirsten Dunn, and Kolbi Dunn, along with two great granddaughters, Molly and Gracie Dunn. Harold grew up in Devils Elbow, MO, graduating from Waynesville High School and served in the U.S. Army during the Korean War. After an honorable discharge from the Army, Harold moved back to the Waynesville area and worked as a furniture salesman for several years. He later began a long career as an entrepreneur owning his own shoe and clothing store(s), was an independent real estate agent, a sewer inspector and owned a lawn care service. Harold was always a very active and busy man who kept going well into his 80s. He and Nyda were members of the Hickory Hills Baptist Church in Waynesville and he enjoyed serving as a Gideon for many years. In 2008, Harold and Nyda moved to Springfield and for the last three years lived in the Brookhaven Nursing Facility where they enjoyed many good times with friends and the wonderful staff there. Harold will be greatly missed by his family and friends. Visitation at 2:30 p.m. followed by a funeral service at 3:30 p.m. will be held on Friday, March 6 at the Memorial Chapels and Crematory with internment in the Hooker Cemetery. Services were under the direction of Memorial Chapels and Crematory of Waynesville / St. Robert.

The family of Harold Leroy Wells created this Life Tributes page to make it easy to share your memories.