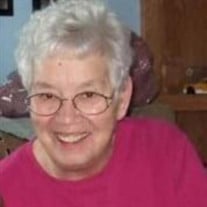 Harriet Marion Saunders, daughter of the late William George and Mabel Louise (Marshall) Nicolai, was born December 17, 1932 in Detroit, Michigan where she grew up and graduated from high school. Marion was a hardworking woman even at a young age. Shortly after graduating from high school she began working for Michigan Bell. She worked there for a time until she met and married her husband, Rodney B. “Sandy” Saunders. They were united in marriage on August 1, 1953 and shared many wonderful memories and seven children: Randy, Becky, Cindi, Timmy, Gene, Dana and Rodney. Sandy passed away on April 26, 1989. After marrying Sandy, Marion was able to stay at home and raise her family. She was a seamstress which she was able to do at home for friends and her family. In her spare time, Marion was an avid bowler. She bowled at least four times a week and in several tournaments. She liked traveling and visiting with family and friends, but she especially enjoyed family trips and all the memories they made along the way. After moving to the Waynesville, Missouri area in 2013 to be closer to her daughter Becky, Marion loved to care for her family here and she especially enjoyed spending time with all her grandchildren whenever she could. Marion passed away Friday, May 1, 2020 in the Life Care Center of Waynesville having attained the age of 87 years. She will be sadly missed, but fondly remembered by all those that knew and loved her. Marion leaves to cherish her memory, her children: Randy Saunders of Athens, PA, Becky Bray (Ron) of Waynesville, MO, Cindi Saunders of Redford, MI, Timmy Saunders of Warren, MI, Gene Saunders (Mary Lake) of Rockford, IL, and Rodney Saunders (Jill) of Westland, MI; son-in-law: Phil Smith of Longmont, CO; sixteen grandchildren; twenty-four great grandchildren; numerous nieces, nephews, other relatives and friends. In addition to her parents and husband, Marion was preceded in death by one daughter: Dana Smith; and five siblings: Ruth Nicolai, Bill Nicolai, Ralph Nicolai, Jean Holland and Alice Boright. Even though she is gone from our sight, Marion will live on in our hearts forever. Services were held at 1:00 p.m. Monday, May 11, 2020 in the Memorial Chapels and Crematory of Waynesville / St. Robert with Pastor John Dinwiddie officiating. Rebecca Bray, Marion’s daughter, recalled her and several family member’s wonderful memories of Marion. The songs “Wind Beneath My Wings” by Bette Midler and “I Can Only Imagine” by Mercy Me were played. Memorial contributions may be made in memory of Harriet Saunders and may be left at Memorial Chapels and Crematory of Waynesville / St. Robert.

Harriet Marion Saunders, daughter of the late William George and Mabel Louise (Marshall) Nicolai, was born December 17, 1932 in Detroit, Michigan where she grew up and graduated from high school. Marion was a hardworking woman even at... View Obituary & Service Information

The family of Harriet Marion Saunders created this Life Tributes page to make it easy to share your memories.