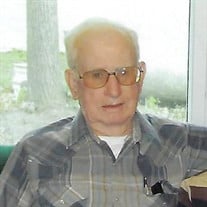 Harvey Ray Denison, son of the late James and Myrtle (Tucker) Denison, was born November 22, 1926 in Knobel, Arkansas where he grew up and attended school. In 1943, Harvey entered the United States Navy and served his country faithfully until his honorable discharge in 1958. He served during World War II and the Korean Conflict and served aboard the USS Herndon, USS New York, and USS Geneva and many naval air stations. He earned several awards and commendations for his faithful service. Some of which include: American Area Asiatic Pacific (2 Stars), Philippine Liberation Commendation Ribbon, World War II Victory Medal, Good Conduct Medal (2nd Award), Korean Service United Nations National Defense and KPUC. Harvey also earned his GED while serving in the Navy. After his honorable discharge from the United States Navy, Harvey began working as an over the road truck driver. He was employed with the Texas-OK Express and spent 21 years driving for them. He was a member of the Local 41 Teamsters of Kansas City, Missouri for 20 years. After retirement, he found temporary employment in various occupations to earn “pocket money”. In his spare time, Harvey enjoyed being outdoors while fishing. He loved to be on the river and visiting with family and friends. He enjoyed traveling with his truck and trailer, watching rodeos and was an avid reader of books about the Wild West. Even though he was not a member of a particular church, Harvey was a man of strong faith. He went home to be with his Lord Thursday, March 7, 2019 in the Missouri Veterans Home of St. James, Missouri having attained the age of 92 years. He will be sadly missed, but fondly remembered by all those who knew and loved him. Harvey leaves to cherish his memory, two nephews: Tom Denison of Houston, TX and James Denison of Moreno Valley, CA; five nieces: Cheryl Denison of Willard, MO, Sue Ann Wilson of Piedmont, MO, Pat Denison of Willard, MO, and Betty Cobb and Ellen Ruth Ray, both of Arkansas; longtime and dear friend: Carolyn Coones of Warsaw, MO; several great nieces, great nephews, other relatives and friends. In addition to his parents, Harvey was preceded in death by three brothers: Roy, Raymond and Philip Denison; two nephews: Mark Denison and Raymond Denison, Jr.; and two nieces: Phyllis Denison and Evelyn Lois Denison. Graveside services with military honors were held at 11:00 a.m. Wednesday, March 13, 2019 in the Missouri Veterans Cemetery of Waynesville with Pastor Danny Graves officiating. Serving as escorts were family and friends. Military honors were provided by the United States Navy and the Missouri Honors Team. Services were under the direction of Memorial Chapels and Crematory of Waynesville / St. Robert.

Harvey Ray Denison, son of the late James and Myrtle (Tucker) Denison, was born November 22, 1926 in Knobel, Arkansas where he grew up and attended school. In 1943, Harvey entered the United States Navy and served his country faithfully... View Obituary & Service Information

The family of Harvey Ray Denison created this Life Tributes page to make it easy to share your memories.