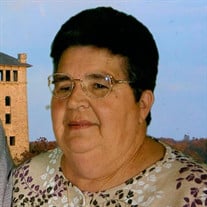 Helen Ruth (Weeks) Babcock, daughter of Walter Price and Margaret (Cunningham) Weeks, was born January 14, 1937. She passed away Sunday, June 12, 2016 in the University of Missouri Hospital and Clinics of Columbia, Missouri having attained the age of 79 years, 4 months and 29 days. Helen grew up and attended grade school in High Hill, Missouri and then attended school in Montgomery City, Missouri through the 11th grade. She was a member of the St. John’s Church of Christ in High Hill, Missouri. On December 17, 1955, Helen was united in marriage to Peter J. Babcock. They shared over 60 years of marriage together and were blessed with two children: Patricia Ann (October 1960) and Michael Eugene (July 1964). In her early years, Helen worked as a clerk at Farmer’s Store in High Hill, Missouri and also in the office as a secretary in a factory in Montgomery City, Missouri. After moving to the Waynesville / Fort Leonard Wood area, she and Peter owned and operated their own Fenced Parking Lot and Garage in St. Robert, Missouri and also acquired a U-Haul dealership before retiring to the lake area. Helen’s main focus in life was making sure her family always came first and taking care of them. She loved her family dearly and treasured every moment she spent with them. Helen will be sadly missed, but fondly remembered by all those that knew and loved her. She leaves to cherish her memory, her husband: Peter Babcock of the home; one daughter: Patricia Perez (Clemente) of St. Robert, MO; one son: Michael Babcock (Denise) of Lebanon, MO; one sister: Margaret Fry of Montgomery City, MO; two sisters-in-law: Margie Weeks of High Hill, MO and Wilma Jane Weeks of Novinger, MO; one cousin: Loyd Weeks of Columbia, MO; other relatives and friends. Helen was preceded in death by her mother: Margaret Cunningham Weeks (1984); father: Walter Price Weeks (1972); brother: Eugene Weeks (1991); brother: James Everett Weeks (2010); and sister: Dorothy Elizabeth Weeks (2011). Services were held at 10:00 a.m. Thursday, June 16, 2016 in the Memorial Chapels and Crematory of Waynesville / St. Robert with Terry Maddux officiating. The songs “Amazing Grace”, “The Old Rugged Cross”, “In the Garden” and “Wind Beneath My Wings” were played. Serving as escorts were Clemente Perez, Michael Bollinger, Mike Rothwell, Fermen Espinoza, Steven Wood and David Harbaugh. Burial followed in the Sunset Memorial Estates Cemetery of Waynesville. Memorial contributions may be made in memory of Helen Babcock to the American Cancer Society or the American Heart Association and may be left at the funeral home.

The family of Helen Ruth Babcock created this Life Tributes page to make it easy to share your memories.