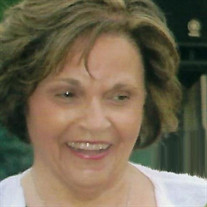 Helen Lou (Miller) Jones, daughter of the late Buell Fletcher and Ella C. (Hardy) Miller, was born March 8, 1939 in Long Lane, Missouri. She passed away Friday, September 18, 2020 in the Lebanon North Nursing and Rehab Center of Lebanon, Missouri having attained the age of 81 years. As a young girl, Helen grew up on a dairy farm in Long Lane and attended the first 8 years of school there. At the beginning of her freshmen year of high school, Helen began attending Buffalo High School and graduated from Buffalo High. Helen continued her education and eventually earned her Master’s Degree in Education. She served as a dedicated educator for 30 years and most of those years were spent in the Waynesville R-VI School District. On March 9, 1959 in Miami, Oklahoma, Helen was united in marriage to Wayne Taylor Jones. They shared over 61 years of marriage together and were blessed with two daughters: Gayla and Jill. In her spare time, Helen was an avid horse enthusiast. She loved raising her foxtrotters and supported her husband and daughter in horse shows across the country. She was a member of the Missouri Foxtrotter Horse Breed Association. She also enjoyed doing different crafts, and spending time with her family and friends. Helen was a member of the KKI (teacher’s organization) and after retiring from serving as a teacher, she continued to support the school and community as serving as a school board member for the Waynesville R-VI School District. Helen loved her family dearly and she leaves to cherish her memory, her husband: Wayne Jones of the home; two daughters: Gayla Jones Brown and Jill Jones Mantle, both of Waynesville, MO; one grandson: Jeremy Brown and wife Chasity of Waynesville, MO; two granddaughters: LuAnn Grandstaff and husband Jake, and Cody Allen and husband Chance, all of Waynesville, MO; four great grandsons: Nolan, Payton, Kaine and Wayden; one great granddaughter: Madison; one brother: Harold Miller and wife Shirley of Rochester, MN; several other relatives and friends. In addition to her parents, Helen was preceded in death by one sister: Donna Watkins. Even though she is gone from our sight, her memory will live on in the hearts and lives of all those she touched throughout her life. A memorial gathering was held from 4:00 – 6:00 p.m. Tuesday, September 22, 2020 in the Memorial Chapels and Crematory of Waynesville / St. Robert. Memorial contributions may be made in memory of Helen Jones to the Waynesville R-VI Schools Scholarship Program and may be left at Memorial Chapels and Crematory of Waynesville / St. Robert.

The family of Helen Lou (Miller) Jones created this Life Tributes page to make it easy to share your memories.