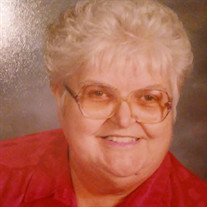 Helen Hilda Livingston, daughter of the late Frederick A and Anna (Leetsch) Hearting, was born August 29, 1935 in Rockville, Missouri. Helen attended school in Appleton City and graduated from Appleton City High School in 1953. Helen went home to be with her Lord Wednesday, September 5, 2018, in her home in St. Robert, having attained the age of 83 years. On August 22, 1954, Helen was united in marriage to James Richard Livingston and they shared 41 wonderful years of marriage together before James death in April of 1996. Helen and James were blessed with five children: Patricia Louise, Janice Ann, James Darrell (who passed in 1999), Rebecca Lynne (who passed in 1973), and Earl Richard. Helen and James owned and operated the Chimney Pawn and Gun Shop for several years before closing it in 1996. They also managed Chimney Trailer Court and the family trust for many years. When she was not operating her business, Helen was very involved in the community. She advocated for the Chamber of Commerce, delivered Meals on Wheels, helped with the Red Cross blood mobile, served on the Bell Committee, volunteered at the Genesis House, belonged to the Red Hats Society, and, closest to her heart, she served the Lord through her many works at Faith Lutheran Church. As a founding member, Helen loved and supported the congregation and community she helped build at Faith Lutheran Church of St. Robert. She was involved with the Ladies Aide, United Church Women, Thrivent, Lutheran Women’s Missionary League. In addition, she helped to ensure many children were able to attend Sunday school and Vacation bible school (as her grandchildren fondly remember). Ever a woman of many talents and passions, Helen enjoyed sewing, knitting and crocheting. She is fondly remembered for the many items she regularly provided to her family, friends, and community for special occasions. Most importantly, she loved her family and would look for every opportunity to get together with them, especially the grandchildren. In addition to her parents, husband, daughter and son, Helen was preceded in death by three brothers: Walter, Elmer and Wilford Hearting; and two sisters: Ethel Rohlfing and Irma Stephan. Helen leaves to cherish her memory, her son, Earl Livingston and wife, Samantha of Springfield, MO; two daughters: Patricia King of Laquey, MO and Janice Livingston-Rivard of St. Robert, MO; four grandchildren: Conswelia McCourt and husband, Robert; Kristina Livingston; Shawn Livingston; and Jazmyn Robertson and husband, Vincent; five great-grandchildren: Jenie, Angelica, Xander, Anastasia, and Easton; and a number of nieces and nephews; as well as a host of other relatives and friends. Helen will be sadly missed, but fondly remembered by all those that knew and loved her. Services were held at 2:00 p.m. Saturday, September 8, 2018 in the Faith Lutheran Church of St. Robert, Missouri with Pastor John Perling officiating. Soloist Michelle Jones, along with Pianist Mary Jones, provided the musical selections, “What A Friend We Have in Jesus”, “Amazing Grace”, “Lift High the Cross” and “On Eagle’s Wings”. Serving as escorts were Xander McCourt, Robert McCourt, Shawn Livingston, Vincent Robertson, Paul Rasmussen and Young Su Kim. Burial followed in the Waynesville Memorial Park Cemetery of Waynesville. Services were under the direction of Memorial Chapels and Crematory of Waynesville / St. Robert. Memorial contributions may be made in memory of Helen Livingston and may be left at the funeral home.

The family of Helen Hilda Livingston created this Life Tributes page to make it easy to share your memories.

Helen Hilda Livingston, daughter of the late Frederick A and...