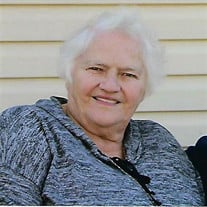 Helene Maria Dalgetty, daughter of the late Alfons and Maria (Siebert) Schwartz, was born October 14, 1932 in Kassel, Germany. In her early years, the family moved to Naumburg, Germany where he was educated in a Jesuit School. She later received her secondary education in business administration and worked for three years as an apprentice in Kassel, Germany. Helene met a United States soldier by the name of George Forrest Dalgetty and they were united in marriage on October 14, 1953 in Kassel, Germany. She quickly and beautifully fell into the role of a warrior’s wife and mother to George’s six sons. Helene loved her role as a wife and mother. She travelled frequently and had many adventures in the United States and abroad. She loved swimming, cooking, and nurturing. She spent many hours surrounded by nature and nurturing the life around her. As a young girl in Germany, Helene was very active in the Catholic Church and upon relocating to the Fort Leonard Wood, Missouri area she continued to serve and was an active member of the St. Robert Bellarmine Catholic Church since 1963. Helene passed away Saturday, June 23, 2018 in her home having attained the age of 85 years, 8 months and 9 days. She will be sadly missed, but fondly remembered by all those that knew and loved her. Helene leaves to cherish her memory four sons: Richard Dalgetty (Betsy) of Alameda, CA, Robert Dalgetty (Laura) of Santos, TX, Mike Dalgetty of Great Mills, MD and George Dalgetty (Norma) of Waynesville, MO; one daughter-in-law: Cheryl Dalgetty; five grandsons, seven granddaughters, thirteen great-grandchildren and other relatives and friends. In addition to her parents, Helene was preceded in death by her husband George Forest Dalgetty (1989); two sons: James Alphonse Dalgetty (2002) and Steven Dalgetty (2011); and one grandson: Nathan Dalgetty (2010). Services were held at 12:00 p.m. Monday, July 2, 2018 in the St. Robert Bellarmine Catholic Church with Father John Groner officiating. Music was provided by organist Evelyn Horine. Serving as escorts were Richard, Robert, Michael, George, Matthew, Zachary and Benjamin Dalgetty and Matthew Wood. Serving as honorary escort was Joseph Dalgetty. Burial followed in the Main Post Cemetery of Fort Leonard Wood, Missouri. Services were under the direction of Memorial Chapels and Crematory of Waynesville / St. Robert. Memorial contributions may be made in memory of Helen Dalgetty to the Waynesville School District Snack in a Pack program and may be left at the funeral home.

Helene Maria Dalgetty, daughter of the late Alfons and Maria (Siebert) Schwartz, was born October 14, 1932 in Kassel, Germany. In her early years, the family moved to Naumburg, Germany where he was educated in a Jesuit School. She later received... View Obituary & Service Information

The family of Helene Maria Dalgetty created this Life Tributes page to make it easy to share your memories.

Helene Maria Dalgetty, daughter of the late Alfons and Maria...