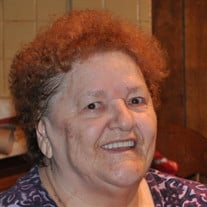 Helga Louisa Isner, daughter of the late Michael and Louisa Riedner, on September 30, 1937 in Wurzburg, Germany and passed away on September 22, 2018 in Springfield, Missouri surrounded by family having attained the age of eighty years. Helga grew up in Germany where she attended school and met a handsome young United States soldier by the name of Harry “Ike” Hobert Isner. They were united in marriage and blessed with four children, Susie, Peggy, Anita and Harry, Jr. Due to Harry being in the military, Helga and the family moved to different duty stations. They were transferred to Ft. Riley, Kansas, Fort Leonard Wood, Missouri, and Germany. At the time of Harry’s retirement, they were stationed at Fort Leonard Wood and they decided to remain here to raise their family. Helga was a hardworking woman. She worked for thirty-two years as a cook at the Mess Hall on Fort Leonard Wood. She loved spending time with her German friends and her fellow co-workers. In her spare time, she enjoyed crocheting, knitting, bowling and even cleaning quarters on Fort Leonard Wood. But most importantly, she loved her family and spending time with them. Helga leaves behind to cherish her memory, her three children, Peggy Anderson of Waynesville, MO, Anita Perry of St. Robert, MO and Harry Isner, Jr. of Waynesville, MO; seven grandchildren, Mandy Bays, Dawn (David) Dean, Ira Perry, Amber Isner, Johnny Perry, Jenette Perry, and Zachary Perry Sr.; three great-grand-children, Logan and Bennett Dean and Zachary Perry, Jr.; two sisters, Margarete Wike of the State of Alaska and Christa Sairu of Germany; a number of nieces and nephews; as well as a host of other relatives and friends. In addition to her parents, Helga was preceded in death by her husband Harry “Ike”, her daughter, Susie and two brothers: Karl and Heinz Riedner. Helga will be sadly missed, but fondly remembered by all those who knew and loved her. Services were held at 12:00 p.m. Wednesday, September 26, 2018 in the Memorial Chapels and Crematory of Waynesville with Pastor Richard Breeden officiating. The songs “Mama” and “Oma So-Lieb” by Heintje Simons and “Auf-Wiedersehn” by Demis Roussos were played. Serving as escorts were Greg Forshey, David Dean, Johnny Perry, Zachary Perry, Ira Perry and Walter Perry. Serving as honorary escorts were Logan Dean, Bennett Dean and Zach Perry, Jr. Burial followed in the Waynesville Memorial Park Cemetery of Waynesville.

Helga Louisa Isner, daughter of the late Michael and Louisa Riedner, on September 30, 1937 in Wurzburg, Germany and passed away on September 22, 2018 in Springfield, Missouri surrounded by family having attained the age of eighty years.... View Obituary & Service Information

The family of Helga Louisa Isner created this Life Tributes page to make it easy to share your memories.