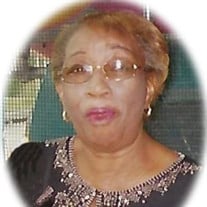 Henrietta Gwin, daughter of Archie and Mary (Hicks) Johnson, was born November 8, 1937, in Wetumpka, Alabama. She passed away on October 24, 2020, in Mercy Hospital in Springfield, Missouri, at the age of eighty-two years old. At 16 years old, she moved to Chicago. She lived, worked, and raised her children for twenty-nine years. She married Stephen Paul Gwin on February 25, 1988. They were married for thirty-three years. In 1991 she and Stephen moved to Waynesville Missouri, where they raised five adopted children. She was a loving and caring homemaker to her family through the years. In her spare time, she enjoyed gardening, ceramics, painting, crocheting, and cooking. Henrietta leaves to cherish her memory, her husband, Stephen, her children, Issiah Mays, Bernard Ward, Teresa Ward-Brinson, and Margie Ward. Her children with Stephen, Brandon, Tiffany, Eddie, Teresa, and Joshua; sixteen grandchildren, Lawrence, Issia, Antoine, Carlos, Shavette and her brother; Anthony Ward, Anthony Brinson, Marcus, Paris, Avin, Laytoya, Raymond, Axel, Sparkle, and Alex; and great-grandchildren, Porscha, Ketana, Gloria, Anthony, Iyana, Ajaden, Antavian, Aniya, Ava, Akina, Faith, and Kayvontae; a brother, Archie Johnson, Jr.; two sisters, Mary “Tiny” White and Georgia “Sugar” Siger; a number of nieces and nephews; as well as a host of other relatives and friends. She was preceded in death by her parents; her two children, Duane Ward and Kenneth Ward; and two siblings, Carrie Davidson, and Charlie Johnson. We celebrate her life and will cherish the wonderful memories she created for her family and friends. She will live on in our hearts forever. Services were held at 11:00 a.m. Friday, November 6, 2020 in the Memorial Chapels and Crematory of Waynesville / St. Robert with Leah Taylor officiating. The songs “Mama”, “Grandma’s Hands”, “Smile”, “At Last” and “Blessed & Highly Favored” were played. Serving as escorts were Joshua Gwin, Eddie Gwin, Brandon Gwin, Anthony Brinson, Antoine Robinson, and Avin Brinson. Burial followed in the Missouri Veterans Cemetery of Waynesville. Memorial contributions may be made in memory of Henrietta Gwin and may be left at Memorial Chapels and Crematory of Waynesville / St. Robert.

Henrietta Gwin, daughter of Archie and Mary (Hicks) Johnson, was born November 8, 1937, in Wetumpka, Alabama. She passed away on October 24, 2020, in Mercy Hospital in Springfield, Missouri, at the age of eighty-two years old. At 16 years... View Obituary & Service Information

The family of Henrietta Gwin created this Life Tributes page to make it easy to share your memories.