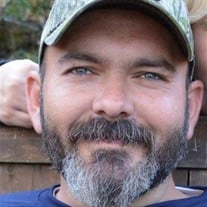 Henry Ray Cook, son of Jackie Dean and Barbara Christina (Salkil) Cook, was born August 14, 1980, in Springfield, Missouri. He departed this life Monday, June 26, 2017, in his home, at Odin, Missouri, at the age of thirty-six years, eight months and twelve days. On May 13, 2001, he was united in marriage to Dara Ann Homan in Mountain Grove, Missouri, and to this union two sons were born. He was preceded in death by his maternal grandfather, Henry Salkil and his paternal grandparents, Ray and Vonna Cook. Henry is survived by his wife, Dara Ann of the home; his two sons, James Wilson Cook and Jacob Dean Cook, both of the home; his parents, Jackie and Barbara Cook of Mansfield, Missouri; his father-in-law and mother-in-law, Steve and Diann Scearce of Mountain Grove, Missouri; his maternal grandmother, Henrietta Salkil of Nixa, Missouri; two brothers-in-law, Kenny Wade (Crystal) of Ozark, Missouri and Michael Wade of Lebanon, Missouri; a niece, Lilly Wade; a very close friend who was like a brother, Barry Robertson of Lebanon, Missouri; several beloved aunts and uncles, as well as a host of other relatives and friends. He was born in Springfield, Missouri and was reared in the Odin Community. He graduated from Hartville High School in the Class of 1998. After he and Dara were married they resided in various locations in Wright for a few years before returning to the family farm to make their home and raise their family throughout the years. Besides being around the farm, Henry had worked for WCA in Hartville for eight years. He recently was working for Wiese USA in Springfield, Missouri. Henry had professed his faith in Jesus Christ and had been baptized. In 2005 he answered the call to the ministry and had surrendered to preach his Lord’s Word. He had pastored the Trinity Freewill Baptist Church in Cabool, Number One Freewill Baptist Church in Huggins, until finding his home church at Denlow General Baptist Church where he had preached since 2011. He loved the Lord’s work and the fellowship of His people. In his spare time he greatly enjoyed hunting, fishing, shooting, and being in the outdoors, especially fixing his smoked meats. He was a good jokester and was always ready to put others first by lending a helping hand to anyone in need. Henry was a loving and devoted husband, father, and son, and was a caring neighbor and friend. He will be fondly remembered and missed by all those who knew and loved him. We celebrate his life and the wonderful memories he created for his family and friends. Even though he is gone from our sight, he will live on in our hearts forever. Services were held at 10:30 a.m. Saturday, July 1, 2017 in the Holman-Howe Funeral Home of Hartville, Missouri with Rev. Danny Cottengim officiating. Danny and Becky Cottengim sang “Let’s All Go Down to the River” and Robin Widner and Carol Robertson were accompanied by Janet Vandergrift as they sang “God on the Mountain” and “I’ll Fly Away”. Serving as escorts were Barry Robertson, Justin Hicks, Drew Widner, George Simmons, Kenny Wade, Michael Wade, Garan Kinsor, Brian Gray, Ben Hughes and Steve Kutz. Burial followed in the Coon Creek Cemetery near Hartville, Missouri. Services were under the direction of Memorial Chapels and Crematory of Waynesville / St. Robert.

The family of Henry Ray Cook created this Life Tributes page to make it easy to share your memories.