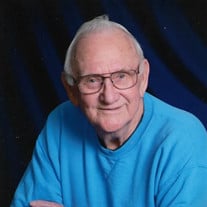 Herman Ross Goodrich, son of the late Seth Goodrich and Margaret Melzona (Gan) Goodrich Fagan, was born September 8, 1937 in Huntington Beach, California. He went home to be with his Lord on Wednesday, May 15, 2019 in his home in Crocker having attained the age of 81. As a young boy, Herman and the family moved to Missouri and he graduated from the Waynesville High School with the Class of 1955. Shortly after graduation, he entered the United States Air Force until his honorable discharge in 1959. Herman came back to Missouri for a short period of time and then moved to Chicago where he was trained as an iron worker. He continued working in construction as an iron worker for 30+ years in the Chicago area and retired at the age of 55 in 1993. During his time in Chicago, he met a young lady by the name of Joyce Lee Patriquin. They were united in marriage on June 16, 1962 in Calumet City, Illinois. They shared over 39 years of marriage together and were blessed with two children, Debra and Daniel, before she preceded him in death in September 2000. After his retirement, Herman and the family moved back to the Crocker, Missouri area where he resided until his passing. He was a member of the Masonic Lodge 1138 and former member of Ironworkers Local 395. He also served as a Crocker City Alderman for a few years. In his spare time, he loved to be outdoors while fishing. He also enjoyed cooking, woodworking and working on machinery and engines. On December 8, 2001, Herman was united in marriage to Marianne (Reitlinger) Roberts in Crocker. They shared over 17 years of marriage together and many wonderful memories. At an early age, Herman had made a profession of faith and after moving to Crocker began attending the First Baptist Church where he was currently a faithful member and deacon. He was very active with the Pulaski Baptist Association and was instrumental in helping with several buildings at the association campground. Herman is survived by his wife, Marianne of the home; five children, Debra Kozar (Ronald) of Dayton, OH, Daniel Goodrich (Kathey) of Houston, MO, Ruby Roam (Garry) of Richland, MO, Betty Plazek of Northfield, OH, and Albert Roberts, Jr of St. James, MO; thirteen grandchildren, nine great-grandchildren; two brothers, Bob Goodrich of Crocker, MO and Roland Fagan (Sandy) of Buckhorn, MO; a number of nieces and nephews; as well as a host of other relatives and friends. In addition to his parents, Herman was preceded in death by his brothers, Charles Goodrich and Oswald Goodrich. Funeral services were held at 10:00 a.m. Tuesday, May 21, 2019 in the First Baptist Church of Crocker, Missouri with Rev. Robin Salsman and Rev. Danny Graves officiating. The songs “In the Garden” and “What a Friend We Have in Jesus” were sung by Becky Lercher. Serving as escorts were Andy Helms, Andy Tumlinson, Rob Goodirch, Nick Goodrich, Hank Newcomb and Matt Schroer. Serving as honorary escorts were Bill Goldsmith and Jeff Black. Burial with military honors followed in the Sunset Memorial Estates Cemetery of Waynesville. Military honors were provided by the Missouri Honors Team. Services were under the direction of Memorial Chapels and Crematory of Waynesville / St. Robert. Memorial Contributions in memory of Herman Goodrich may be made to the Pulaski County Baptist Association, and may be left at the visitation or the funeral home.

Herman Ross Goodrich, son of the late Seth Goodrich and Margaret Melzona (Gan) Goodrich Fagan, was born September 8, 1937 in Huntington Beach, California. He went home to be with his Lord on Wednesday, May 15, 2019 in his home in Crocker having... View Obituary & Service Information

The family of Herman Ross Goodrich created this Life Tributes page to make it easy to share your memories.