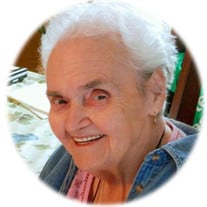 Herta Keith, daughter of the late Ludwig Ultsch and Lisette Seiler Ultsch, was born April 5, 1928 in Hof, Germany where he grew up and attended school. Herta was united in marriage to a United States Army soldier, Laurence Thomas Keith and were married in Heidelberg, Germany. They shared over 37 years of marriage and six children: Viola, Mary Jane, Larry, Mona, Susan and June. Laurence preceded her in death on July 13, 1991. Herta was a hardworking woman and took great pride in helping to provide for her family. She was employed as a factory worker, cleaning quarters (housing) and after moving to the Fort Leonard Wood area, she began working for Toombs & Sons (now known as EDP) and then as a cafeteria cook for the Waynesville RVI School District. In her spare time, Herta enjoyed crocheting and playing games, such as cards and Yahtzee. She especially loved to watch the Price is Right, Family Feud and Bones. She liked to go to Branson and see the different shows. She especially enjoyed the Christmas season and loved spending time with her family and friends. At the age of 66, Herta was baptized at the Fairview Baptist Church on April 16, 1995 and became a faithful member of the church until her health began to decline. Herta went home to be with her Lord Saturday, February 27, 2016 in the Cox South Regional Medical Center of Springfield, Missouri having attained the age of 87 years. She will be sadly missed, but fondly remembered by all those that knew and loved her. She leaves to cherish her memory, two daughters: June Keith of Waynesville, MO and Susan Vandegriff (Kevin) of Springfield, MO; five grandchildren: Wendy Sue Ford (Thomas) of Gardners, PA, Laurence Thomas Keith, III of Waynesville, MO, Bobby Lee Keith (Brianna) of Waynesville, MO, Jennifer Drury (Justin) of Spartanburg, SC and Joseph Vasquez of Waynesville, MO; several great grandchildren; other relatives and friends. In addition to her parents and husband, Herta was preceded in death by infant daughter: Mary Jane Keith; two daughters: Viola Arnold (2013) and Mona Brown (2014) and son Larry Keith, Jr. (2015). Services were held at 2:30 p.m. Wednesday, March 2, 2016 in the Memorial Chapels and Crematory of Waynesville / St. Robert with Bro. Larry Suggs officiating. The songs “I’ll Walk with God” by Mario Lanza, “Stille Nacht” and “Heaven” by Michael English were played. A eulogy from the family was read by Becky Lercher and Herta's grandson, Larry Keith recalled his wonderful memories of his grandmother. Serving as escorts were Larry Keith, Bobby Lee Keith, Kevin Vandegriff, Joe Vasquez and Jenkins Drury. Burial followed in the Waynesville Memorial Park Cemetery of Waynesville. Memorial contributions may be made in memory of Herta Keith and may be left at the funeral home.

Herta Keith, daughter of the late Ludwig Ultsch and Lisette Seiler Ultsch, was born April 5, 1928 in Hof, Germany where he grew up and attended school. Herta was united in marriage to a United States Army soldier, Laurence Thomas Keith... View Obituary & Service Information

The family of Herta Keith created this Life Tributes page to make it easy to share your memories.