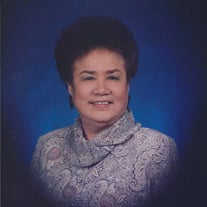 Hisako Borjon, daughter of the late Suki Hatashi and Jumataro Ikeuchi, was born June 16, 1927 in Nagasaki, Japan. She passed away Tuesday, February 12, 2019 in the Silverado Senior Living of Tustin, California having attained the age of 91 years, 7 months and 26 days. Hisako met a handsome young United States Army soldier by the name of Max J. Borjon. They met while he was serving in Japan and they fell in love. They were united in marriage on May 22, 1951 in Fukuoka, Japan and they were blessed with four daughters: Maxine, Patricia, Inez and Ernestine “Tina”. Due to Max being in the Army, Hisako and the family moved to different duty stations with him. At the time of his retirement, they were stationed at Fort Leonard Wood, Missouri where they remained. Hisako worked on Fort Leonard Wood and was a supervisor of the Camera and Electronics Department for AAFES. In her spare time, she loved to make crafts. She was an excellent seamstress and was also very good at crocheting. She made beautiful woven fish mobiles and would also knit and make origami. She also dabbled some in painting. Hisako was a member of the St. Robert Bellarmine Catholic Church and was active until her health began to fail. She was also a member of the Harry Herron Memorial DAV Chapter 49 Ladies Auxiliary. Hisako loved her family tremendously and looked forward to every chance they could be together. She will be sadly missed, but fondly remembered by all those who knew and loved her. She leaves to cherish her memory, her four children: Maxine H. Borjon of Durham, NC, Patty Borjon (Mark Holmes) of Tustin, CA, Inez Neeley (Dave Neeley) of Waynesville, MO and Ernestine “Tina” Woods (Rick Woods) of Raleigh-Durham, NC; six grandchildren: Alex Neeley of Charleston, SC, Shanna Neeley Finney (John) of St. Louis, MO, Skyler Borjon-Holmes of Tustin, CA, Richelle Woods Hendricks (Sheldon) of Durham, NC, Sara Woods Irving (Hal) of Franklin, NC and Rhema Woods of Durham, NC; three great grandchildren: Leilani Hendricks and Reid Hendricks of Durham, NC and BrynLea Irving of Franklin, NC; other relatives and friends. In addition to her parents, Hisako was preceded in death by her husband, SGM (Ret) Max J. Borjon on April 17, 2006. Funeral services were held at 1:00 p.m. Thursday, February 21, 2019 in the Memorial Chapels and Crematory of Waynesville / St. Robert with Father John Groner officiating. Soloist Becky Lercher sang “Amazing Grace” and serving as escorts were family and friends. Burial followed in the Resurrection Cemetery of St. Robert, Missouri.

Hisako Borjon, daughter of the late Suki Hatashi and Jumataro Ikeuchi, was born June 16, 1927 in Nagasaki, Japan. She passed away Tuesday, February 12, 2019 in the Silverado Senior Living of Tustin, California having attained the age of 91... View Obituary & Service Information

The family of HIsako Borjon created this Life Tributes page to make it easy to share your memories.

Hisako Borjon, daughter of the late Suki Hatashi and Jumataro...