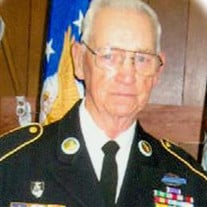 Howard William Reynolds, son of the late Lester Earl and Tempie Perola (Davis) Reynolds, was born November 6, 1930 in Ellsinore, Missouri. He attended Elementary School in Anderson, Missouri for 5 years and later earned his GED while serving in the military. Howard began working at an early age as a sewing machine operator and stitched burlap bags which held feed. He worked in a feed mill and after sewing the feed sacks, he loaded them into trucks. Howard entered the United States Army in 1949 at the age of 17 and served 20 years, retiring in 1968. He had attained the rank of Sergeant and served as a Drill Sergeant. For his faithful service, he earned several awards and commendations; some of which included: Good Conduct Medal (5th Award), National Defense Service Medal w/Oak Leaf Cluster, Vietnam Campaign Medal, Vietnam Service Medal, Army Commendation Medal, Combat Infantry Badge (2nd Award) and the Purple Heart. On August 10, 1956, Howard was united in marriage to Ayrus Elizabeth Hollingshead in Manhattan, Kansas. They shared over 59 years of marriage together and four children: Howard Jr., Bruce Wayne, Michael Eugene, and Pearl Mae. After retiring from the military, Howard began working as the Chief of Police for the City of Richland for several years and then went to work at the Missouri State Penitentiary in Jefferson City, Missouri in 1971. He retired there as a recreation officer in 1987. In his spare time, Howard loved to play golf and bingo. He also enjoyed traveling and working around the house. He was a lifetime member of the American Legion Post 240 of Richland, the VFW 3168 of Laquey, the DAV of Waynesville Chapter 49, and the Purple Heart Association. Howard passed away Monday evening, March 14, 2016 in his home having attained the age of 85. He will be sadly missed, but fondly remembered by all those that knew and loved him. Howard leaves to cherish his memory, his wife: Ayrus E. Reynolds of the home; three sons: Howard W. Reynolds, Jr. (Virginia) of Beloit, WI, Bruce Wayne Reynolds (Tammy) of Richland, MO and Michael Eugene Reynolds (Anita) of Springfield, MO; one daughter: Pearl Mae Basham (Danny) of Waynesville, MO; eight grandchildren; fourteen great grandchildren; one great-great grandchild; one sister: Carol Lee Roark of Columbia, MO; other relatives and friends. In addition to his parents, Howard was preceded in death by one sister: Laura Mae Reynolds; one brother: James Everett Reynolds; and one grandson: Howard W. Reynolds III. Services were held at 11:00 a.m., Thursday, March 17, 2016, in the Memorial Chapel of Richland, Missouri with a United States Army Chaplain, (CPT) Mwevi Mwilima officiating. Recorded music selections included, “Amazing Grace,” “Islands in the Stream” and “Believe.” Serving as escorts were the United States Army. Honorary escorts included Howard W. Reynolds II, Bruce W. Reynolds, Michael E. Reynolds, Douglas E. Black and Zachary D. Black. Interment with Military Honors followed in the Missouri Veterans Cemetery of Waynesville, Missouri. Services were under the direction of Memorial Chapel of Richland, Missouri. Memorial contributions may be made in memory of Howard Reynolds and may be left at the funeral home.

The family of SGT (Ret) Howard William Reynolds created this Life Tributes page to make it easy to share your memories.