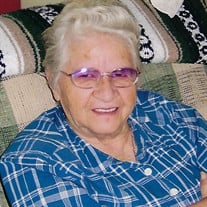 Ica Mae Zeigenbein, daughter of the late Thomas J. and Maud (Griffin) Henderson, was born April 15, 1928 in Crocker, Missouri. At the age of 10, Mae and her family moved to Waynesville where she attended school. On October 16, 1942, in Leavenworth, Kansas, Mae was united in marriage to Joseph Abraham “Joe” Zeigenbein. They were blessed with over 67 years of marriage and four children: James Richard, Howard Roy, Debra K. and Sandra J. Joe preceded Mae in death on April 28, 2010. As a young woman, Mae made a very important decision in her life and accepted Jesus Christ as her Lord and Savior. She was baptized on May 2, 1966. She and Joe were charter members of the Ft. Wood Church of God and put in many hours into the construction of the church and also served on various committees and boards. She was a member of the Woman’s Missionary Society and was always willing to help wherever she was needed. When Mae and Joe married, they spent the early parts of their marriage working on the farm. But due to some loss of crops and to help with the family income, they would help people out by hauling their trash. Little did they know that this would be the beginning of Zeigenbein Sanitation. At the time of Joe’s passing in 2010, they had owned and operated the business for 52 years. Mae loved to sing, play the guitar and go to Gospel concerts in the area. She even wrote a song titled “He Spoke to Me”. She also enjoyed being outdoors while fishing or just enjoying nature. She was an avid reader and also collected stamps. Most importantly, she loved her family and enjoyed spending time with them. Mae went home to be with her Lord Saturday, October 5, 2019 in her home having attained the age of 91 years. She will be sadly missed, but fondly remembered by all those who knew and loved her. She leaves to cherish her memory, her four children: James “Richard” Zeigenbein (Pauline) of St. Robert, MO, Howard Roy Zeigenbein of Springfield, MO, Debra K. Campbell (Donald) of Waynesville, MO and Sandra Dolan of Colorado Springs, CO; seven grandchildren; eighteen great grandchildren; seven great-great grandchildren; several nieces, nephews, other relatives and friends. In addition to her parents and husband, Mae was preceded in death by three brothers: Edward and Willard Henderson and Carl Henderson (who died as an infant); two sisters: Frieda Fleschute and Jean; daughter-in-law Martha Zeigenbein; and one great granddaughter: Chloe Burroughs. Services were held at 10:00 a.m. Saturday, October 12, 2019 in the Church of God of St. Robert, Missouri with Pastor William Kempen and Pastor Ron Leggett officiating. Becky Lercher sang “He Spoke to Me”, “In the Garden”, and “How Great thou Art” and the song “Church in the Wildwood” was played. Serving as escorts were Ronnie Henderson, Allen Hart, Wayne Henderson, James Rosenauer, Larry Childers and Marty Burroughs. Burial followed in the Sunset Memorial Estates Cemetery of Waynesville. Services were under the direction of Memorial Chapels and Crematory of Waynesville / St. Robert. Memorial contributions may be made in memory of Mae Zeigenbein and may be left at the funeral home.

Ica Mae Zeigenbein, daughter of the late Thomas J. and Maud (Griffin) Henderson, was born April 15, 1928 in Crocker, Missouri. At the age of 10, Mae and her family moved to Waynesville where she attended school. On October 16, 1942, in... View Obituary & Service Information

The family of Ica Mae Zeigenbein created this Life Tributes page to make it easy to share your memories.