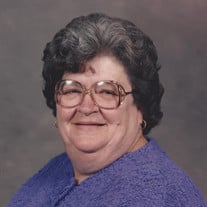 Ida Faye Day, daughter of Elmer Hansen “Sooner” and Opal (Austin) Coxen, was born Aug 22, 1928, on the family farm, in the Coon Creek Community, near Hartville, Missouri. She departed this life to enter her Heavenly Home, Thursday, April 6, 2017, in the Hartville Care Center, in Hartville, Missouri, at the age of eighty-eight years, seven months and fourteen days. On September 8, 1945, she was united in marriage to Jesse James Day, and to this union a daughter and a son was born. Faye had professed her faith in Jesus Christ and was a longtime member of the Coon Creek Freewill Baptist Church. She loved her Lord and working in the church over the years. She was born and reared near Coon Creek and attended the Coon Creek School. After she and Jesse were married they moved to Idaho for a few years to work, but returned to Wright County and bought the farm near their family, where they lovingly raised their children. During working years, besides being a homemaker to her family, Faye had worked at the Tobin-Hamilton Shoe Company in Mansfield, the H.D. Lee Factory in Hartville and Lebanon, United Valcan Heel Company in Hartville, and was a cook at the Hartville School, where she retired from in 1992. She always said “cooking at the school was her favorite job”. Faye loved her family dearly. She found great joy in being with them at holidays, gatherings, or just cooking for them and having them over for a meal. “Granny” as she was affectionately known, was a wonderful cook, it was one of her favorite things to do. In her spare time she also enjoyed growing and working in her flowers, gardening, quilting and when she could, attending church. She was a member of the Hartville Garden Club, Hartville Senior Citizens and served as the Brush Creek Republican Central Committee Woman, and the Brush Creek Township Collector for many years. Faye leaves to cherish her memory her daughter, Carol Robertson and her husband, Lloyd of Hartville, Mo; her son, Dale Day and his wife, Brenda, who was like a daughter to Faye, caring for her needs in her daily life; three grandchildren, Robin Widner (Martin) of Waynesville, MO, Stephanie Dugger (Michael) of Hartville, MO, and Barry Robertson of Lebanon, MO; six great-grandchildren, Adam Widner (Hollie), Drew Widner (Whitney), Ethan Widner, Daylea Nuckels (Brady) , Gunner Dugger and Somer Dugger, seven great-great-grandchildren, Rylan, Owen, Beyah, Adilee, Jase, Brylee and Scarlett Faye; her sister, Maxine Hake and husband, Richard of Lake St. Louis, MO; three sisters-in-law, Marilyn Coxen of Springfield, MO, Myrtle Day of Norwood, MO and Louise Day of Poplar Bluff, MO; a number of nieces and nephews; a special friend, Kenny Murrell, who showered her with sweet treats and occasional gifts, and cared for her bird feeder; as well as a host of other relatives and friends. She was preceded in death by her parents, her husband, Jesse on March 26, 1999; and her brother Clyde Coxen. Faye was a loving and devoted wife, mother, grandmother, great-grandmother, and great-great-grandmother, and a caring sister and friend. She will be fondly remembered and greatly missed by all those that knew and loved her. We celebrate her life and will treasure the wonderful memories she created for her family and friends. She will live on in our hearts forever. We Love You Granny! Services were held at 10:30 a.m. Tuesday, April 11, 2017 in the Holman-Howe Funeral Home of Hartville, Missouri with Rev. Russell McDaris officiating. Kirby Clark sang “Mama Loved the Roses” and the McDaris Family sang “Mansion Over the Hilltop” and “Won’t It Be Wonderful There”. Serving as escorts were Robin Widner, Stephanie Dugger, Michael Dugger, Barry Robertson, Adam Widner, Drew Widner, Ethan Widner, Daylea Nuckels, Gunner Dugger and Somer Dugger. Burial followed in the Coon Creek Cemetery near Hartville. Services were under the direction of Memorial Chapels and Crematory of Waynesville / St. Robert. A memorial has been established to Coon Creek Cemetery in memory of Faye Day, and contributions may be left at the funeral home.

The family of Ida Faye Day created this Life Tributes page to make it easy to share your memories.