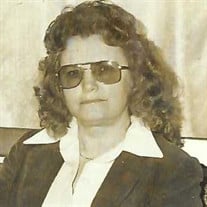 Ida Margaret Newell, daughter of the late Joel and Ruby May (Hawken) Luttrell, was born December 20, 1933 in a cabin near Brumley, Missouri. She attended school later in Barton County before moving to Richland graduating from the eighth grade there. Ida married the boy next door, George Donald Newell on January 4, 1950 in Waynesville, Missouri, and shared over sixty-nine years together. God blessed their lives with five children. Ida was a devoted homemaker, wife, mother, and grandmother to her family; and enjoyed the privilege of helping raise four of her grandchildren. Ida also worked outside the home for the HD LEE and Brown Shoe Factories. In August of 1955, Ida was saved while attending Dublin Baptist Church, and was baptized in the Gasconade River. Later, Ida moved her membership to Elm Grove where she was a member for forty years. Ida & George then moved their membership to First Baptist, before joining Grace Baptist Church in Richland where they currently attend. Throughout Ida’s life she enjoyed gardening, horseback riding, fishing, and raising bottles calves. Ida was a talented artist and was a member of the Richland Art Guild. She loved painting pictures and had won ribbons from time to time. However, her greatest love was her family. She treasured the times spent with them. With her family by her side, Ida quietly left this world behind to reside in her Father’s Heavenly home the evening of Saturday, September 21, 2019 while at the Richland Care Center having attained the age of eighty-five years. Ida leaves behind to cherish her memory her devoted, loving husband George of the home; her three children, Susan Kay Doyle (Todd) and Donald Newell (Laura) all of Crocker, MO, and Richard Newell (Tammy) of Richland, MO; twelve grandchildren, twenty-five great-grandchildren, and four great-great-grandchildren; two sisters, Vivian Sue Boren (James) of Richland, MO and Carol Callison of Barnett, MO; one brother, Sammy Luttrell of Richland, MO; her little dog, Daisy; a number of nieces and nephews; as well as a host of other relatives and friends. Ida is preceded in death by her parents, Joel and Ruby, one brother, Junior Luttrell, two sons, Stanley and Jimmy Newell, her father and mother-in-law, Roy and Myrtle Newell. The love and prayers received from Ida’s family, friends, and neighbors down through the years were precious to her and she treasured each of them. And even though Ida is gone from our sight, she will forever live on in the hearts of those who knew and loved her. Services were held at 2:00 p.m., Wednesday, September 25, 2019 in the Memorial Chapel of Richland with Pastor Doug Jacobson officiating. Great-granddaughter, Jocelynn Newell sang, “I’ll Fly Away.” Guitarist, Jim Stamper accompanied Doug and Sandy Scott as they sang, “Amazing Grace” and “Because He Lives.” Serving as escorts were TJ Doyle, Charlie Boren, James Newell, Dennis Shelton, Jeremy Newell & Timmy Luttrell. Honorary escorts were Josh Vire, Matthew Vire, Richard Luttrell Nathaniel Ballenger, Joe Boren and Roy Mitschele. Burial followed in the Mountview Cemetery near Richland, Missouri. Services were under the care and direction of Memorial Chapel of Richland. Memorial Contributions in memory of Ida Newell can be made to the Mount View Cemetery, and can be left at Memorial Chapel of Richland.

Ida Margaret Newell, daughter of the late Joel and Ruby May (Hawken) Luttrell, was born December 20, 1933 in a cabin near Brumley, Missouri. She attended school later in Barton County before moving to Richland graduating from the eighth grade... View Obituary & Service Information

The family of Ida Margaret Newell created this Life Tributes page to make it easy to share your memories.

Ida Margaret Newell, daughter of the late Joel and Ruby May (Hawken)...