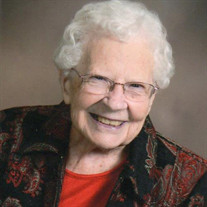 Ilda Virginia Bland Henley was born on August 1, 1921, to W. Everett Bland and Lois Fox Bland on a wheat farm in Argonia, Kansas. She was the fourth child of this union with 2 older sisters Ruth and Edith, a brother Harold and 2 younger brothers Donald and Bill. She grew up in this wheat growing country learning the value of the land, hard work, and an abiding faith and belief in God. When she was 7 years old she accepted Jesus Christ as her personal Savior and was baptized in the creek. At this young age, Ilda start her journey with the Lord that lasted her entire lifetime. Ilda was a woman of faith who lived and shared her love of Christ with those all around her. Ilda was truly a Godly woman more precious than rubies. At the age of 16 the family relocated to Colorado Spring, where she continued her education until she became ill and left school. Leaving school early left her with a determination that she would later instill upon her children, ensuring they each finish as much schooling as possible. She then worked in various positions including being a nurse’s aide and working in a drug store. While working at the drug store she was introduced to her best friend’s date, a handsome soldier stationed at Ft. Carson. Before very long that handsome Sergeant, William “Bill” Henley was her date. Then on June 10, 1943 they were wed. Ilda became a soldier’s wife and traveled around the country, to Alaska and onto foreign soil raising her children and making a home wherever the Army sent them. She loved to travel and see new things, as well as meet new people. She had an amazing joy for life and curiosity about the world around her. A new military assignment was just another opportunity to explore and learn and to reach out to other people. They were happily married for 45 years until Bill passed away in June of 1988. In 1965 when Bill received orders to go to Korea, the family moved from Ft. Leonard Wood to Richland. She became a member of First Baptist Church and worked faithfully in many of the ministries in the church. She was an active member of the Valerie Seat Prayer group and a dedicated prayer warrior. She was active in the PTO and her children’s schools. She became a member of the American Legion Auxiliary and maintained membership for 45 years, working actively for veterans and their families. She was also a member of the Eastern Star. As a young wife expecting her first child, Ilda’s mother taught her to sew. She expressed to her that this would be essential if she had girls someday. This was the beginning of a life-long love of sewing and quilting. She made many quilts, most of them being given away to her family. Some of her favorite times were meeting with “the group” at the Christian Church for their weekly quilting bee. Ilda’s life was full. She loved well, served God, reached out to all, and doted on her family every chance given. Her pride and joy were the Grandkids, Great-Grandkids and the Great-Great-Grandkids. She was the true matriarch of this family and left the legacy of love and service to them all. Ilda leaves behind to cherish her memory 2 daughters, Carolyn Baker and Janice Bramham both of Richland, MO; 8 grandchildren: Paul Baker (Starla) of Springfield, MO, Jay Baker (Misty) of Richland, MO, Sam Bramham (Tracy) of Rolla, MO, April Mulnik (Mike) of Branson, MO, Megan Sirvio (Brent) of Appleton, WI, Grace Kelley (Andrew) of Branson, MO, Virginia Henley (Tom) of Anchorage, AK and Robert Feuschel (Penny) of Los Alamos, NM; 20 great grandchildren; 4 great-great grandchildren: several nephews, nieces, cousins and other relatives and friends. She is preceded in death by her parents, her beloved husband, Bill, two sons, Robert Leroy Henley and Marvin Eugene Henley, one daughter, Betty Lorain Helms, two grandchildren, Michael Henley and Jenny Bramham; one great grandchild, Colin Mulnik, two sisters, Ruth Brown and Edith Pudge, three brothers, Harold, Donald and Bill Bland. Ilda was a loving and devoted wife, mother, grandmother, great-grandmother, and great-great-grandmother, and a caring sister and friend. She will be fondly remembered and greatly missed by all those that knew and loved her. We celebrate her life and will treasure the wonderful memories she created for her family and friends. She will live on in our hearts forever. Services were held Friday, August 10, 2018, in the First Baptist Church of Richland with Pastor Bill Bland, Pastor Bob Lilly and grandson, Paul Baker officiating. Song leader Josh Chism, accompanied by pianist, Marleen Brown led the congregation as they sang, “I Saw the Light,” “Victory in Jesus,” “When We All Get to Heaven,” “When the Roll in Called Up Yonder,” “Because He Lives,” and “There’s a Land That Is Fairer than Day.” Ilda’s great-granddaughter, Katie Bramham and Monique Stokes played beautiful flute renditions of “Amazing Grace,” and “Just as I Am.” Soloist, Josh Chism sang, “How Great Thou Art.” The song, “I Can Only Imagine” completed the music service. Serving as escorts were Mike Mulnik, Seth Baker, Sam Bramham, Roy Brown, Jay Baker and Emanuel Brooks. Honorary escorts included Paul Baker, Tony Helms, Andrew Kelley and Brent Sirvio. Burial followed in the Oaklawn Cemetery of Richland, Missouri. Services were under the care and direction of Memorial Chapel of Richland. Memorial Contributions may be made in memory of Ilda Henley and may be left at the Memorial Chapel of Richland. Online condolences may be left at www.richlandmemorialchapel.com

Ilda Virginia Bland Henley was born on August 1, 1921, to W. Everett Bland and Lois Fox Bland on a wheat farm in Argonia, Kansas. She was the fourth child of this union with 2 older sisters Ruth and Edith, a brother Harold and 2 younger brothers... View Obituary & Service Information

The family of Ilda Virginia Henley created this Life Tributes page to make it easy to share your memories.