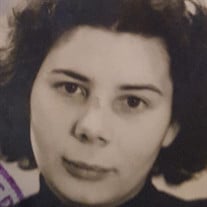 Ilse Louise Jewett, daughter of the late Karl Krambrokers and Elisabeth (Meyer) Krambrokers, was born April 1, 1931 in Hanover, Germany where she grew up and attended school. In 1956, Ilse moved to the United States and in 1975, moved to the Waynesville, Missouri area where she remained until her passing. Ilse was a hardworking woman and served as a waitress for 40 years at various restaurants, including the Hub Restaurant and the Bavarian House. She loved visiting with the customers that she waited on. In her spare time, Ilse loved watching the Game Show Network on television. She attended Westside Baptist Church until her health began to decline. Ilse went home to be with her Lord Saturday, December 24, 2016, in the Life Care Center of Waynesville, Missouri having attained the age of eighty-five years. She will be sadly missed, but fondly remembered by all those that knew and loved her. Ilse leaves to cherish her memory, her children: Stephen (Phyllis) Surmiller of Brenham, TX, Kay (Glenn) Williams of Camdenton, MO, Donna Vaughn of Lake of the Ozarks, MO, Barbara Hoskins of Lebanon, MO, Billy (Jenn) Jewett of Waynesville, MO and Ronnie (Jennifer) Jewett of Dinwiddie, VA; twelve grandchildren and six great-grandchildren; other relatives and friends. In addition to her parents, Ilse was preceded in death by one brother: Ralf Krambrokers; one son in-law: Larry Hoskins. Services were held at 1:00 p.m. Tuesday, December 27, 2016 in the Memorial Chapels and Crematory of Waynesville / St. Robert with Pastor John Shaw officiating. The songs “Amazing Grace” and “Angels Among Us” were played. Serving as escorts were Nathan Carmack, James L. McCall, Scotty McCall, Jason Surmiller, Shane Jewett and Glenn Williams. Burial followed in the Sunset Memorial Estates Cemetery of Waynesville. Memorial contributions may be made in memory of Ilse Jewett and may be left at the funeral home.

Ilse Louise Jewett, daughter of the late Karl Krambrokers and Elisabeth (Meyer) Krambrokers, was born April 1, 1931 in Hanover, Germany where she grew up and attended school. In 1956, Ilse moved to the United States and in 1975, moved... View Obituary & Service Information

The family of Ilse Louise Jewett created this Life Tributes page to make it easy to share your memories.

Ilse Louise Jewett, daughter of the late Karl Krambrokers and...