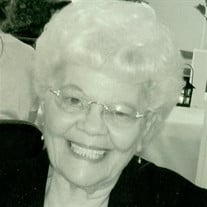 ImaJean Faye Wrightson, daughter of the late Harry Harvey and Elva (Adam) Langhofer, was born February 28, 1936 in Alta Vista, Kansas. As a young girl, ImaJean grew up in Herington, Kansas and was a graduate of Herington High School. On October 18, 1951, ImaJean was united in marriage to Roy Lee Wrightson in Marion, Kansas. They shared over 62 years of marriage together and were blessed with two daughters and one son. Their son unfortunately passed away at birth. At an early age, ImaJean made a profession of faith. She was raised in the Church of God in Herington and after moving to the St. Robert area, she became of a member of the St. Robert Church of God. ImaJean took great pride in helping to provide for her family. She worked as a Civil Service employee for 29 years before retiring in August 1997. For 23 of those years, ImaJean worked in Finance and Accounting. In her spare time, ImaJean enjoyed crafts of all kinds and playing cards. She was a very good dancer and loved to square dance and ballroom dance as well. She loved to drive her Cadillac cars. She was a member of the Shrine Wives Club and the women’s groups at church. ImaJean went home to be with her Lord Wednesday, June 11, 2014, in Mercy Hospital of Lebanon having attained the age of 78 years. She will be sadly missed by all those that knew and loved her. ImaJean leaves to cherish her memory, her husband, Roy, of the home; two daughters: Punky Lovin (Roger) of Ellerbe, NC and Cindy Benson (Tom) of Waynesville, MO; four granddaughters: Fran Rachels (Jonathan) of Carthage, NC, Angela McDonald (Jamie) of Ledbetter, NC, Mandy Conley (Charles) of Waynesville, MO, and Samantha Ferraro (James) of Raeford, NC; 10 great-grandchildren: Gage and Grayson Rachels, Douglas, Emma and Mayson McDonald, Seth and Jacob Bott, Emily Conley, and Mariah and Tristen Ferraro; 4 brothers: Gavin, Devern, Delphos, and Wayne Langhofer, all of Herington, KS; and a number of nieces and nephews. In addition to her parents and son, ImaJean was preceded in death by one brother: Charlie Langhofer and one sister: Joyce Daughtery.

ImaJean Faye Wrightson, daughter of the late Harry Harvey and Elva (Adam) Langhofer, was born February 28, 1936 in Alta Vista, Kansas. As a young girl, ImaJean grew up in Herington, Kansas and was a graduate of Herington High School. On... View Obituary & Service Information

The family of ImaJean Faye Wrightson created this Life Tributes page to make it easy to share your memories.

ImaJean Faye Wrightson, daughter of the late Harry Harvey and...