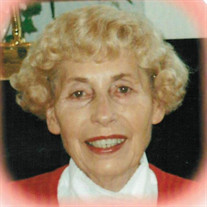 Ingeborg Wilson, daughter of the late Hugo and Alwine Elizabeth Hildegard (Grunzig) Kastropp, was born February 17, 1926, in Stuttgart, Germany, where she grew up and attended school. She spent her teenage years in Germany during World War II sheltering nightly with her family in the cellar during Allied air raids. Because of food rationing towards the end of the war, she was relocated from Stuttgart to a small farm where she resided with a friend of the family. During the Allied Occupation of Germany, Ingeborg worked for the American military in the post office where she met her husband-to-be, Baker Wilson, Jr. The happy couple was married March 15, 1952, in Stuttgart, Germany. God later blessed them with two precious children, Gary Hugh and Iris Angelique. Due to Baker’s military career, Inge and the family were stationed in several locations both inside and outside of the United States: Okinawa, Japan; El Paso, Texas; Vogelweh, Germany; and San Francisco (Presidio), California. Although they moved frequently, Inge’s home was wherever her beloved Baker and children were. After Baker retired from the military, they returned to Richland, Missouri, (where Baker had grown up) and built a home on the farm. Baker and Inge (or Schatze, as he referred to her fondly – meaning “sweetheart” or “darling” in German) clearly demonstrated what a marriage was meant to look like. Because of their loving relationship, Inge was able to counsel young women in forming Christ-like relationships. But their passion to spread Christ’s Word did not end there. Together they taught Sunday School, hosted prayer and praise meetings in their home, and opened their farm for hayrides and bonfires. They were always happy to lend a helping hand to anyone in need. In the 1970’s, Inge worked for the Richland Housing Authority as a bookkeeper. While there, she, along with her sister Anneliese Cottiers and dear friend Ginny Poeschel, established God’s Pantry, a non-profit organization, to help supply food and other needs for their community. Inge made a profession of faith in Christ as a young girl and lived her life accordingly. She loved the Lord and shared her testimony of her experiences during and after World War II with many. She was a member of Cornerstone Baptist Church where she loved her church family as they did her. She was a prayer warrior who fervently brought the worries and needs of her church family and friends to the Lord. Inge had seen the Lord work in her life in significant ways many times and loved sharing it with everyone. Her missionary field was wherever she was. Beginning in 2006, Inge spent winters in Florida with her daughter. She enjoyed playing Rummy and Mensch Auge Dich Nicht, a German board game akin to Sorry, with Roy’s mother. In 2012, she moved to Florida permanently, residing at an assisted living facility near her daughter’s home. While there, she became friends with many of the residents and staff. She loved distributing her testimony and talking about the Lord. She touched as many lives as she could. Ingeborg’s final year was spent living with her daughter Iris and son-in-law Roy, along with his mother. She enjoyed singing, receiving cards and phone calls from her friends and family back home, and, of course, continuing to share her faith. Ingeborg went to be with her Lord April 25, 2018, in Lakeland, Florida, having attained the age of 92 years and was preceded in death by Baker on April 15, 2005, and her son Gary on January 15, 2018. She leaves behind to cherish her memory, her loving daughter: Iris Kasmar and her husband, Roy of Mulberry, Florida; three grandchildren: Lauren Applehof and her husband, Trevor of New Port Richey, Florida; Andrew Kasmar of Greenville, South Carolina, Daniel Kasmar of Mulberry, Florida; and a great–granddaughter to be born in October 2018; her sister: Soferle Anderson of Hector, Minnesota; several sisters-in-law and brothers-in-law, nieces, nephews; as well as a host of other relatives and friends. Inge was a wonderful daughter, wife, mother, grandmother, sister, aunt and friend. The legacy she leaves behind was that of a faithful witness and servant of Christ. She lived her life with a loving spirit and a sweet smile. She was dearly loved and will be profoundly missed. Heaven is her new glorious home where she surely will hear, “Well done, good and faithful servant.” Services were held at 12:00 Noon, Saturday, May 5, 2018, in the Cornerstone Baptist Church, with Pastor Chuck Baker officiating. The congregation sang “I’ll Fly Away,” led by soloist and pianist, Marsha Reagan. Soloist, Denise Wilkerson sang “He Touched Me” and later sang with her daughter, Lindsey Wilkerson, “Thank You for Giving to the Lord.” Serving as escorts were Andrew Kasmar, Daniel Kasmar, Donnie Anderson, Randy Wilkerson, Tom Reagan and Max Thornsberry. Honorary escorts were Trevor Applehof and Roy Kasmar. Burial followed in the Oaklawn Cemetery. Services were under the care and direction of Memorial Chapel of Richland. Memorial contributions may be made in memory of Inge Wilson to either Jews for Jesus, or to the Cornerstone Baptist Church of Richland and and may be left at the funeral home.

Ingeborg Wilson, daughter of the late Hugo and Alwine Elizabeth Hildegard (Grunzig) Kastropp, was born February 17, 1926, in Stuttgart, Germany, where she grew up and attended school. She spent her teenage years in Germany during World War II... View Obituary & Service Information

The family of Ingeborg Wilson created this Life Tributes page to make it easy to share your memories.

Ingeborg Wilson, daughter of the late Hugo and Alwine Elizabeth...