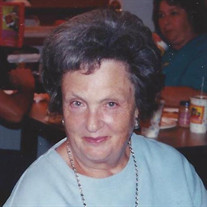 Ingeburg Marie Tagge was born to the union of Joseph and Maria Sailer in Sonthofen, Germany on January 9, 1926. She was the oldest of two children. She passed away on January 10, 2019. Growing up in beautiful Bavaria, she would ride her bike through the Alps, a strenuous 12-mile roundtrip through the mountains to visit her cousin. When WWII broke out her life was disrupted and she eventually lost numerous relatives to the war. During this time of turmoil, she worked as a street car conductor while living with nuns in a convent with other girls away from their homes to obtain work. In her early 20’s she met and married George Conrad Tagge while he was in the U.S. military stationed in Germany, and to this union 5 children were born: Iris, Lonnie, Linda, Ronald, & Sandra. In 1953, she and her 3-year-old firstborn came to the United States on an ocean liner that came through the port of Ellis Island. In 1956 when her husband was stationed at Fort Leonard Wood, the family moved to Waynesville, Missouri. While in Waynesville, her family grew to completion. Throughout her life she proved to be a loving, generous, industrious wife, mother and member of the community. At the death of her husband in 1968, she continued to support the family by her strong work ethics that included 26 years of civil service employment with the Department of the Army at Fort Leonard Wood. Inge was a person of many diverse abilities…. gardening, sewing, knitting, crocheting and cooking (best pineapple upside-down cake), to name a few. She shared the fruits of her talents with family and many others. In addition, Inge became a successful business woman developing a mobile home community known for its clean, safe environment that has accommodated both military & civilian families for 50 years. In 2007 Inge suffered a major stroke which made it impossible to live alone. The last 12 years of her life she was in the loving care of her daughter Linda. Inge was a lifelong member of the Catholic church and is survived by her five children, Iris Edmondson (Gary) of Ocala, Florida, Lonnie Tagge (Kelly) of Waynesville, Mo., Linda Tagge of Kansas City, Mo., Ronald Tagge of Springfield, Mo., Sandy (Rajiv) of Pretoria, South Africa; six grandchildren, one great grandchild and one brother, Siegfried Sailer of Germany. Services were held at 10:30 a.m. Tuesday, January 15, 2019 in the St. Robert Bellarmine Catholic Church with Father John Groner officiating. Organist Evelyn Horine sang “Amazing Grace” and “The Old Rugged Cross” and accompanied the congregation for their responses. Serving as escorts were Lonnie Tagge, Ronald Tagge, Landon Tagge, Ed Kubisiak and Ron Nick. Serving as honorary escort was Don Champagne. Burial followed in the Main Post Cemetery of Fort Leonard Wood, Missouri. Services were under the direction of Memorial Chapels and Crematory of Waynesville / St. Robert. Memorial Contributions in memory of Inge Tagge may be left at the funeral home.

Ingeburg Marie Tagge was born to the union of Joseph and Maria Sailer in Sonthofen, Germany on January 9, 1926. She was the oldest of two children. She passed away on January 10, 2019. Growing up in beautiful Bavaria, she would ride her... View Obituary & Service Information

The family of Ingeburg Maria Tagge created this Life Tributes page to make it easy to share your memories.

Ingeburg Marie Tagge was born to the union of Joseph and Maria...