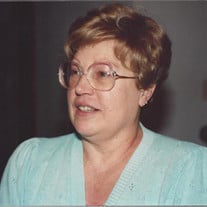 Ingrid Helga Barrett, daughter of the late Franz Perner and Anna (Kleinbauer) Perner, was born July 23, 1939 in Germany where she grew up and attended school. As a young bride, Ingrid came to the United States with her husband, Bobbie Alfred Barrett, who was a United States Army soldier. They were wed in Mannheim, Germany on April 20, 1957 at the Coleman Barracks Chapel. They shared several years of marriage together and were blessed with four children: Alfred, Michael, Nancy, and Jullie. After moving to the United States, Ingrid began working for AAFES (Army and Air Force Exchange Service) as a food service worker, main store worker and as a commissary stocker. After coming to the Fort Leonard Wood area, Ingrid began working for Walmart as a stocker. In her spare time, Ingrid loved being out in her yard working in her beautiful flower gardens. She took great pride in her gardens, and she kept them well-manicured. She also enjoyed sewing and made several different items for family and friends. The day before her passing, Ingrid made an important decision in her life and accepted Jesus Christ as her Savior. So, on Thursday, February 24, 2022 in her home in Waynesville, she went home to be with her Lord. She had attained the age of 82 years. She will be sadly missed, but fondly remembered by all those that knew and loved her. She leaves to cherish her memory, her two sons, Alfred Barrett (Denise) of Crocker, MO, Michael Barrett of Elkins, AR; her son-in-law, Paul Szymanski; nine grandchildren, Heath Szymanski, Rebecca Orr, Amanda Phillips, Micheal R. Barrett, Shawn Barrett, Christopher Barrett, Ashlei Barrett, Michael B. Barrett, and David Barrett; nine great-grandchildren, Daniel Orr, Adelynn Orr, Kale Szymanski, Kaitlyn Szymanski, Marcus Barrett, Lilly Barrett, Allison Sherbo, Paisley Pepper, and Maisey Pepper; as well as a host of other relatives and friends. In addition to her parents, Ingrid was preceded in death by her husband: Bobbie Alfred Barrett, and two daughters: Nancy Szymanski and Jullie Barrett. Funeral services were held at 2:00 p.m. Wednesday, March 2, 2022 in the Memorial Chapels and Crematory of Waynesville, Missouri with Pastor Robin Salsman officiating. The song "Amazing Grace" by Elvis Presley was played. Serving as escorts were Christopher Barrett, Shawn Barrett, Micheal R. Barrett, Dwayne Phillips, Ed Orr, and Daniel Orr. Burial followed in the Sunset Memorial Estates Cemetery of Waynesville. Memorial contributions can be made in memory of Ingrid Barrett, and may be left at the funeral home.

Ingrid Helga Barrett, daughter of the late Franz Perner and Anna (Kleinbauer) Perner, was born July 23, 1939 in Germany where she grew up and attended school. As a young bride, Ingrid came to the United States with her husband, Bobbie... View Obituary & Service Information

The family of Ingrid Helga Barrett created this Life Tributes page to make it easy to share your memories.