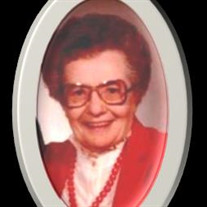 Iola Mae (Wells) Rayl Pearson, daughter of the late Arthur and Pearl E. (Hall) Wells, was born September 28, 1917 in Montrose, South Dakota. She went home to be with her Lord on Monday, November 9, 2015 in the Richland Care Center of Richland, Missouri having attained the age of 98 years. As a young girl Iola, her mother and sister traveled by train to Missouri while her father came with the household belongings in a covered wagon from South Dakota to Missouri. They settled in the Buckhorn area and Iola graduated from Waynesville High School. After high school, Iola earned her teaching certificate and she taught in one and two room schoolhouses in the Pulaski County area with her friend Helen Nicks. Iola’s last year of teaching was in Laquey, MO school. Iola was united in marriage to Drue Edly Rayl on September 29, 1935 and they were blessed with one daughter, Joyce. Drue and Iola shared 63 years together before he preceded her in death. After teaching, Iola helped Drue found the Richland Livestock Exchange. In their spare time, Drue and Iola loved to travel in the US and abroad, and sang in a gospel quartet in area churches. Drue and Iola lived on the farm all of their life where they raised their daughter Joyce who was their pride and joy. In her spare time, Iola loved to collect antique furniture, depression glass and other collectables. Most importantly, she loved spending time with her family and friends. At an early age, Iola made a profession of faith in Jesus Christ. She and Drue were founding members of two churches; Deerlick Baptist and Buckhorn Baptist. In her later years, she was a member of the First Baptist Church of Richland. She was a regular attender and worker until her health failed. On December 26, 1999, Iola was united in marriage to Theodore “Ted” Pearson in Batesville, Arkansas and they shared many wonderful memories until he preceded her in death. Iola will be sadly missed, but fondly remembered by all those that knew and loved her. She leaves to cherish her memory, her grandson: Tommy Roam (Wanda) of Jefferson City, MO; son-in-law: Bob Fugitt (Marilyn) of Richland, MO; three grandchildren: Marilyn Gorman (Bill) of Monett, MO, Glenda Duncan (Mark) of Cassville, MO and Bruce Fugitt (Jan) of Mtn. Grove, MO; several great grandchildren, great-great grandchildren, nieces and a nephew and other relatives and friends. In addition to her parents and two husbands, Iola was preceded in death by her daughter: Joyce Etta Fugitt; one sister: Jeanette Pierre; and two grandchildren: Peggy Denise Roam and Richard Lee Fugitt. Services were held at 11:00 a.m, Friday, November 13, 2015 in the Memorial Chapel of Richland with Pastor Bob Lilly officiating. Soloist, Becky Lercher sang "Beulah Land." Serving as escorts were Iola’s family and friends. Burial followed in the Oaklawn Cemetery of Richland, Missouri. Services were under the direction of Memorial Chapel of Richland. In lieu of flowers, memorial contributions may be made in memory of Iola Pearson to the Hospice Compassus and may be left at the funeral home.

Iola Mae (Wells) Rayl Pearson, daughter of the late Arthur and Pearl E. (Hall) Wells, was born September 28, 1917 in Montrose, South Dakota. She went home to be with her Lord on Monday, November 9, 2015 in the Richland Care Center of Richland,... View Obituary & Service Information

The family of Iola Mae (Wells) Rayl Pearson created this Life Tributes page to make it easy to share your memories.