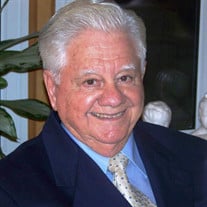 Jack Paul Garzelli, son of Frank Paul Garzelli and Johanna (Grabowski) Garzelli, was born July 12, 1928 in Gary, Indiana where he grew up and graduated from Tolleston High School with the Class of 1945. Shortly after graduation, Jack was drafted into the United States Army and served in Tokyo, Japan from 1945 – 1947. fter being honorably discharged from the military, Jack attended Missouri State University and graduated in 1951. He began his teaching career with his first official teaching job being at Newburg, Missouri in 1951. He then came to Waynesville, Missouri where he taught for the Waynesville R-VI School District until his retirement in 1987. He taught government, American History, Economics, as well as Western Civilization. Jack also taught for several colleges and universities; some of which include: Southwest Baptist University, Drury University, Columbia College, and Valley City University in North Dakota. He spent the longest time at Columbia College where he taught for 30 years and retired in 2003. On November 22, 1951, Jack was united in marriage to Belle Louise Laughlin in Alton, Missouri. They shared over 69 years of marriage together and were blessed with two children: Brent and Beth. Jack and Louise made their home and raised their family in Waynesville, Missouri where they were very active in their community throughout the years. They are members of Westside Baptist Church in Waynesville and were active until their health began to decline. Jack loved the martial arts, especially Karate and Judo and even was an instructor for many years. After his retirement from teaching, Jack perfected his hobby of making wall clocks out of cypress wood and he enjoyed sharing them with family and friends. Jack also loved history so much that collecting and reading history books was a real passion. Jack was a member of the Kiwanis Club, Karate Club, MSTA (Missouri State Teacher’s Association) and served a term on the Waynesville R-VI School Board from 1987 – 1990. Jack went home to be with his Lord on Friday, January 1, 2021 in his home having attained the age of 92 years of age. He will be sadly missed, but fondly remembered by all those that knew and loved him. Jack leaves to cherish his memory, his wife: Louise Garzelli of the home; two children: Brent Garzelli (Cheryl) of Waynesville, MO and Beth Crow (Tom) of Waynesville, MO; two grandchildren: Jennifer Brown (Mike) of Waynesville, MO and Erin Garzelli of Birmingham, AL; three step-grandchildren: Christopher Crow of Laquey, MO, Amy Zimmerman (Michael) of Springfield, VA, and Matthew Crow of Waynesville, MO; two great grandchildren: Jayden and McKinna; seven step great grandchildren: Nathaniel, Michaela, Grace, Haley, Leilani, Elena, and Alexis; other relatives and friends. Jack was preceded in death by his father: Frank Paul Garzelli in 1976; mother: Johanna (Grabowski) Garzelli in 1998; and one brother: Daniel Francis Garzelli in 2020. Funeral services were held at 12:00 p.m. Friday, January 8, 2021 in the Westside Baptist Church of Waynesville with Pastor John Shaw and Pastor Lindell Shelden officiating. The music was provided by Gilbert Crismon, Mike Freman, and Becky Lercher. Serving as escorts were Brent Garzelli, Tom Crow, Mike Brown, Jayden Brown, Steve Lynch, and Dennis Dye. Burial with military honors followed in the Missouri Veterans Cemetery of Waynesville. Military honors were provided by the Missouri Honors Team. Services were under the direction of Memorial Chapels and Crematory of Waynesville / St. Robert. Memorial contributions may be made in memory of Jack Garzelli to the St. Jude’s Children’s Hospital and may be left at Memorial Chapels and Crematory of Waynesville / St. Robert.

Jack Paul Garzelli, son of Frank Paul Garzelli and Johanna (Grabowski) Garzelli, was born July 12, 1928 in Gary, Indiana where he grew up and graduated from Tolleston High School with the Class of 1945. Shortly after graduation, Jack... View Obituary & Service Information

The family of Jack Paul Garzelli created this Life Tributes page to make it easy to share your memories.