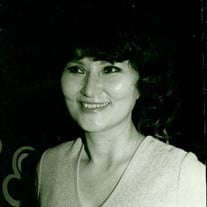 Jackie Ai Lyung Dickerson was born November 4, 1930 in Seoul, South Korea and passed away Thursday, March 8, 2018 in her home having attained the age of eighty-seven years. As a young girl, Jackie grew up in South Korea and she later moved to the United States. In 1962, she moved to Missouri. She was united in marriage to John Edward William Dickerson on March 26, 1968 and they shared three children: Johnny, Vicki, and John, Jr. Jackie was a go-getter and was a business owner for over 40 years. She owned and operated the 7-11 Club, Tinkle Bar, Jackie’s Bar, and the Ranch Motel. In her spare time, Jackie thoroughly enjoyed to garden and feed the birds in her yard. She had an impressive rose and vegetable garden. She was a multi-faceted individual; some of her many talents included drawing, painting, sewing, knitting and crocheting. She loved music and anytime she would take a trip with her daughter, Jackie would start the music as soon as getting in the car. Jackie was a very caring, thoughtful and sincere woman. She was passionate about taking care of people in the community and was always willing to lend a helping hand. Jackie’s first love was her family. She loved to spend time with them and found joy in cooking for them. She took great pleasure in being a Grandmother and Great-Grandmother and she loved them deeply. She was a good hearted woman and will be deeply missed. Jackie leaves to cherish her memory two children: Johnny Jackson of St. Robert, MO and Vicki Fincher of Waynesville, MO; five grandchildren: Benjamin, Jacob and Sarah Jackson of St. Robert, MO and Christopher Fincher (Marlena) and Kimberly Hiatt (Patrick) of Columbia, MO; three great grandchildren: Christopher, Jordan and Jaxon Fincher; two brothers; several nieces, nephews, other relatives and friends. Jackie was preceded in death by her parents, husband John and one son, John Edward William Dickerson, Jr. Graveside services were held at 11:00 a.m. Wednesday, March 14, 2018 in the Missouri Veterans Cemetery of Waynesville with Pastor Chris Hendrix officiating. Marlena, Jackie’s granddaughter-in-law, recalled the family’s wonderful memories of Jackie. Serving as escorts were family and friends. Services were under the direction of Memorial Chapels and Crematory of Waynesville / St. Robert.

Jackie Ai Lyung Dickerson was born November 4, 1930 in Seoul, South Korea and passed away Thursday, March 8, 2018 in her home having attained the age of eighty-seven years. As a young girl, Jackie grew up in South Korea and she later moved... View Obituary & Service Information

The family of Jackie Dickerson created this Life Tributes page to make it easy to share your memories.