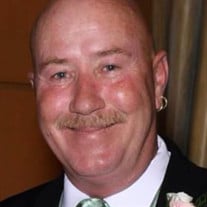 Jackie Allan “Jack” Linthicum, son of the late George Robert Linthicum and Liselotte Sofia (Blas) Linthicum, was born April 8, 1956 in Heidelberg, Germany. Due to Jack’s father being in the military, he grew up in many different areas of the country, but called Enterprise, Alabama his home. While in the 4th grade at Hillcrest Elementary School, Jack met a girl by the name of Susan Blanche McMillan. He chased her and when he caught her, he gave her a kiss on the check. They did not meet again until he was in the 10th grade when he moved back from being in Germany. Jack and Susan shared the same home room and they eventually began dating. On June 14, 1975, they were united in marriage and shared over 45 years of marriage together and two children: Lisa and Jack. In 1974, Jack entered the United States Army and served his country faithfully until his retirement on September 1, 1995 after 21 years of service. He had attained the rank of Staff Sergeant and earned several awards and commendations; some of which include: Meritorious Service Medal -2nd Award, Army Commendation Medal – 4th Award, Army Achievement Medal, Army Good conduct Medal – 6th Award, National Defense Service Medal, Southwest Asia Service Medal, Kuwait Liberation Medal, NCO Professional Development Ribbon – 3rd Award, Arm Service Ribbon, Overseas Service Ribbon -3rd Award, Drivers Badge, Marksman Qualification Badge M16 Rifle, and the German Armed Forces Marksmanship Badge (Silver). After retiring from the military, Jack worked for a private contractor for 10 years before serving as a civil service employee. He retired on May 27, 2011. In his spare time, Jack loved being outdoors. You could find him either hunting, fishing, playing golf, or his favorite pastime was flying (he was a private pilot). He was a life member of the American Legion #331, Francis J Lynch VFW Post 3168, Harry Herron DAV Chapter 49, and the 40 & 8. Jack passed away Friday, March 19, 2021 in his home having attained the age of 64 years. He will be sadly missed, but fondly remembered by all those that knew and loved him. Jack leaves to cherish his memory, his wife: Susan Linthicum of the home; two children: Lisa Hale (Andrew) of St. Louis, MO, and Jack B. Linthicum (Jennifer) of Rolla, MO; one sister: Mary Ann Sparkman of Enterprise, AL; one brother: George R. Linthicum II of Enterprise, AL; two grandchildren: Emma and Bradan; two nieces, other relatives, and friends. In addition to his parents, Jack was preceded in death by one sister: Joanie. Funeral services were held at 12:00 p.m. Tuesday, March 23, 2021 in the Memorial Chapels and Crematory of Waynesville / St. Robert. Burial with military honors followed in the Missouri Veterans Cemetery of Waynesville, MO. Memorial contributions may be made in memory of SSG (Ret) Jack Linthicum and may be left at Memorial Chapels and Crematory of Waynesville / St. Robert.

Jackie Allan &#8220;Jack&#8221; Linthicum, son of the late George Robert Linthicum and Liselotte Sofia (Blas) Linthicum, was born April 8, 1956 in Heidelberg, Germany. Due to Jack&#8217;s father being in the military, he grew up in many... View Obituary & Service Information

The family of SSG (Ret) Jackie Allan Linthicum created this Life Tributes page to make it easy to share your memories.