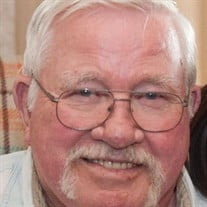 Jackie Allen Stewart was born on May 9, 1934 to the late William E. and Blanche V. (Salsman) Steward in Hazelgreen, Missouri. He grew up on Turkey Ridge in Pulaski County before joining the United States Army in 1953, where he proudly served his country and received the National Defense Service Medal before his honorable discharge in 1954. After the service, Jackie went to work at Fort Leonard Wood delivering fuel. He later worked for Geo Bros. Service Station in Waynesville, MO. In 1962, Jackie moved to Jefferson City and began working for the Department of Corrections until 1964 before leaving there to work at the Unites States Post Office, retiring in 1985. Jackie married Ollie (Ballard) in 1956 and together they raised five children before their marriage ended in 1998. Jackie then met Shirley Ann Alexander; the two were married September 9, 1999 in Richland, Missouri, and shared ten years together before Shirley’s passing on September 3, 2009. He was a member of the Fraternal Order of Eagles in Jefferson City, Missouri. Jackie liked to fish, and spent many summer camping trips with his family teaching his children to fish and swim. Jackie was a respected and skilled gunsmith and sportsman. He loved riding motorcycles and visited every state in the US on his motorcycle. Jackie was an avid reader and over the years had read almost every book by his favorite author Louis L'Amour. Jackie was a caring and loving father who passed on to his children and grandchildren all of these talents, skills and passion. Jackie passed away on the evening of Tuesday, July 5, 2016 in Russellville, Missouri, having attained the age of 82 years. Jackie is survived by his children: Danny Stewart of Columbia, MO, Charlotte Noll (Robert) of Russellville, MO, Pandora Prince of Barnett, MO, Alice Behrens of Barnett, MO, and Elaine Buschjost (Paul) of Russellville, MO; two sisters: Patsy Maddox of Fulton, MO and Ronda Bacon of Springfield, MO; 9 grandchildren: Matthew Farris, Marsha Murphy, Erika Gozho, Perry Behrens II, Trevor Stewart, Jakeb Morris, Liam Stewart, Katy Morris, Nathan Morris; 11 great-great grandchildren: Preston Crocker, Abby Farris, Hunter Crocker, Emma Farris, Josiah Gozho, Taylor Crocker, Valerie Gozho, Dakota Stewart, Christian Murphy, Elahana Behrens and Charlie Morris; numerous nieces, nephews and other relatives and friends. Jackie was preceded in death by his parents, his wife, one sister Norma Brizendine and one brother William “Billy” Harrison and his great-granddaughter, Eleanor Farris. Jackie will be sadly missed by all those who knew and loved him, but his memory will remain in their hearts forever. A memorial service was held at 1:00 p.m., Saturday July 9, 2016 in the Memorial Chapel of Richland, Missouri with Pastor Brent Newton officiating. Jack's grandson, Matt Farris, gave the obituary reading. Favorited music recordings included, "Dancing In the Sky," "Go Rest High on that Mountain," "Amazing Grace," and "Daddy's Hands." Burial with full military honors provided by the Missouri Honors Team, Jefferson City, Missouri,followed in the Hazelgreen Cemetery, Hazelgreen, Missouri. Services are under the direction of the Memorial Chapel of Richland. In lieu of flowers, memorial contributions may be made in memory of Jackie Stewart to the Hazelgreen Cemetery fund and can be left at the Memorial Chapel of Richland. Online condolences may be left at www.memorialchapelsandcrematory.com

Jackie Allen Stewart was born on May 9, 1934 to the late William E. and Blanche V. (Salsman) Steward in Hazelgreen, Missouri. He grew up on Turkey Ridge in Pulaski County before joining the United States Army in 1953, where he proudly served... View Obituary & Service Information

The family of Jackie Allen Stewart created this Life Tributes page to make it easy to share your memories.