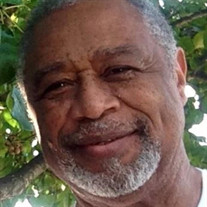 James Clarence “Jim “Bolton, son of the late Clarence Bolton and Amanda Jane (Sherman) Bolton, was born November 17, 1941 in Bernice, Louisiana where he grew up a sharecropper’s son. As a young teenager, Jim grew up in Bernice, Louisiana where he attended and graduated from Westside High. Jim was elected class president three out the four years of high school and earned the nickname “Prez”. During his high school years, Jim was an all-star football player. He played offensive and defensive, but he was known as one of the best running backs. In fact, everyone tried to talk him into trying to go on to the pros. But Jim had other plans. He enlisted in the United States Army and served his country faithfully until his retirement. He had attained the rank of First Sergeant and earned several awards and commendations; some of which include: National Defense Service Medal, Army Service Ribbon, Overseas Service Ribbon-4, Armed Forces Expeditionary Medal, Army Achievement Medal-2, Non-Commissioned Officer Professional Development Ribbon-1, Army Good Conduct Medal-7, Meritorious Service Medal-3, Sharpshooter Qualification Badge M-16 Rifle and Marksman Qualification Badge 9mm Pistol. Jim was united in marriage to Christine Katherine Wakkila and they were blessed with one son: Christopher Leonard Bolton. While serving in the military, Jim worked as a ward nurse and after coming to the Fort Leonard Wood, Missouri area, he worked in the General Leonard Wood Army Community Hospital in almost every department in the hospital. After retiring from the military, Jim continued to serve as a substance and behavioral abuse counselor at the Piney Ridge Center of Waynesville for many years. He was a mentor to so many kids and was always willing to help them. Jim was a 33-year loyal member and contributor of the Midway Serenity Group. He would answer his phone all hours of the night and day to help those that needed help. In his spare time, Jim enjoyed going hunting, fishing, working in his vegetable and flower gardens, bowling, and cooking. When it came to holidays, he would always take care of the meat for the dinner he would be helping with. He loved to come up with new recipes for his grill and was always trying new things. And he was the best grill master there was! Jim lived a life of serving others and that attitude of service came from a very important decision he made in his life, accepting Jesus Christ as his Savior. He was a faithful member of the Hickory Hills Baptist Church and served as a Sunday School Superintendent and teacher. He also was the head grill master at all the church fellowships. Jim went home to be with his Lord Sunday, April 11, 2021 in the General Leonard Wood Army Community Hospital of Fort Leonard Wood, Missouri having attained the age of 79 years. Jim is survived by his wife: Christine Bolton; one son: Christopher Bolton of Pensacola, FL; one grandson: Isaac Figueroa of Bethlehem, GA; five siblings: Shirley Talley of Pensacola, FL, Beverly Bolton Anderson of Muskegon, MI, Kenneth Bolton of Lilly, LA, Karen Bolton Hall of Bernice, LA, and Jethro Bolton of the State of California; several nieces, nephews, other relatives, and a host of friends. Even though he is gone from our sight, Jim’s attitude of service and loving others will live on in our hearts forever. Funeral services were held at 11:00 a.m. Friday, April 16, 2021 in the Hickory Hills Baptist Church of St. Robert, MO. Burial with military honors followed in the Missouri Veterans Cemetery of Waynesville, MO. Services were under the direction of Memorial Chapels and Crematory of Waynesville / St. Robert. Memorial contributions may be made in memory of Jim Bolton and may be left at Memorial Chapels and Crematory of Waynesville / St. Robert.

James Clarence &#8220;Jim &#8220;Bolton, son of the late Clarence Bolton and Amanda Jane (Sherman) Bolton, was born November 17, 1941 in Bernice, Louisiana where he grew up a sharecropper&#8217;s son. As a young teenager, Jim grew up... View Obituary & Service Information

The family of 1SG (Ret) James Clarence "Jim" Bolton created this Life Tributes page to make it easy to share your memories.