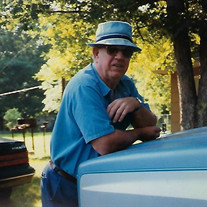 James “Dude” Franklin Greer, son of the late Wilmer Jennings and Bessie (Roberson) Greer, was born October 3, 1934 in Waynesville, Missouri where he grew up and attended school. Dude, as he was known by his family and friends, met a young girl that lived down the road from him, by the name of Sharon Lorraine Hable. She caught his eye and they began dating. They were united in marriage on July 31, 1971 in Waynesville and were blessed with 47 years of marriage and five children. In 1956, Dude began working maintenance for the City of Waynesville Water and Sewer District and retired in 1996, after 40 years of service. In his spare time, he loved being outdoors while hunting, fishing, and working in the garden. He also enjoyed woodworking and whittling. Most importantly, he loved his family and he cherished spending time with them, especially the grandchildren. In 1989, Dude made a profession of faith and was baptized. He was a faithful member of the First Free Will Baptist Church of Waynesville and was there every time the doors were open until his health began to decline. Dude went home to be with his Lord Tuesday, September 4, 2018 in the Richland Care Center of Richland, Missouri having attained the age of 83 years. Dude leaves to cherish his memory his wife: Sharon Greer of the home; five children: Cheryl Clark of St. Louis, MO, Ken Greer (Nancy) of Springfield, MO, Mike Greer (Teresa) of Richland, MO, Tom Greer (Kandi) of Waynesville, MO and Mercy Mackey (James) of the state of Oklahoma; ten grandchildren: Mark Wagoner (Anela) of Waynesville, MO, Nick Wagoner (Anna) of St. Louis, MO, Eric Wagoner (Heather) of St. Louis, MO, Dustin Greer (Sabra) and Austin Greer, both of Richland, MO, Ashley Choudhury (Abir) of Springfield, MO, Kenzi Greer of Springfield, MO, Tarryn Mackey of Columbia, MO, Glory Dann (Adam) of Germany and Jenna Greer of Springfield, MO; eight great grandchildren: Conner, Maya, Jake, Carter, Mattie, Lucas, Grace and Addison on the way; three brothers: Cecil Greer (Lois) of Lebanon, MO, Clarence Greer of Dixon, MO, and Erwin Greer of St. Robert, MO; three sisters: Debbie Liebig (Mike) of St. Robert, MO, Linda Hickey (Paul) of the state of Illinois and Ida Allen of Waynesville, MO; several nieces, nephews, other relatives and friends. In addition to his parents, Dude was preceded in death by one sister: Pansy Nelson and three brothers: Buster, Dean and Virgil Greer; and one grandchild: Trey Greer. Services were held at 12:00 p.m. Saturday, September 8, 2018 in the Memorial Chapels and Crematory of Waynesville / St. Robert with Pastor Russell Johnson officiating. John Moody was accompanied by Pianist Vonda Johnson as they led the congregation in singing “In the Garden” and “I’ll Meet You in the Morning”. Soloist Tarryn Mackey sang “I Can Only Imagine”. Serving as escorts were Dustin Greer, Austin Greer, Eric Wagoner, Nick Wagoner, Mark Wagoner and James Mackey. Burial followed in the Waynesville Memorial Park Cemetery of Waynesville. Memorial contributions may be made in memory of Dude Greer and may be left at the funeral home.

James &#8220;Dude&#8221; Franklin Greer, son of the late Wilmer Jennings and Bessie (Roberson) Greer, was born October 3, 1934 in Waynesville, Missouri where he grew up and attended school. Dude, as he was known by his family and friends,... View Obituary & Service Information

The family of James "Dude" Franklin Greer created this Life Tributes page to make it easy to share your memories.