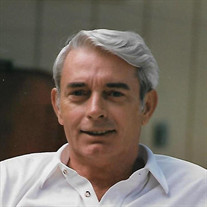 James D. Arnold was born on January 7, 1935 in South Bend, Indiana to Earl Arnold and Maude (Irvine) Arnold. He attended grade school in South Bend and Michigan City, Indiana and graduated from high school in Michigan City. He then attended Tri-State College (now Trine University) and earned an MBA degree from Mizzou. After graduating from Tri-State he worked for the CPA firm Arthur Anderson in Chicago for about 6 months before being drafted on his 23rd birthday in 1958. His two years in the Army were spent at Ft. Leonard Wood in Missouri and Camp McCoy in Wisconsin auditing non-appropriated funds. After his discharge in January 1960 rather then returning to Arthur Anderson, he stayed in Waynesville and was hired as the office manager of the NCO Club on Ft Leonard Wood. Jim also started a part-time business doing accounting and tax work in Waynesville. Jim was married to Kathy Doyle in May 1964 by Rev Wolfe in Waynesville. They had two sons, Bruce and Earl. In August of 1964, Jim won the Democratic nomination for State Representative from Pulaski County and was elected in November 1964; he served 12 years in the Missouri Legislature. During that period the primary focus of his business changed from accounting and tax work to insurance and real estate. In 1976 he decided not to seek re-election, so he could spend more time with his family and business interest. He was a member at Westside Baptist Church, active in Democratic politics, Armed Services YMCA, Optimist Club, Chamber of Commerce, AUSA and a 50 plus year member of the Waynesville Lodge #375, Scottish Rite and Abou Ben Adhem Shrine Temple. He enjoyed gardening, fishing and other water activities at Lake of the Ozarks. He also enjoyed coaching little league baseball and basketball. Jim and Kathy were married for over 31 years. After Kathy’s passing, Jim married Wilma Phillips on June 22, 1996 and their two families became one. After retirement, they moved to Springfield and moved their membership to South Gate Baptist church. They enjoyed volunteering at Cox Hospital, Council of Churches and Meals on Wheels. Jim and Wilma also enjoyed traveling and were able to take several trips and tours while in good health. The most important thing for both was spending time with their children, grandchildren and other family members. Jim was preceded in death by his parents, his first wife, Kathy, his son, Bruce, his sisters, Shirley Parker and Nancy Eggers, two sisters-in-law, Charlotte Nickels and Beverly Smith and two brothers-in-law, Gene Eggers and Boone Doyle. He is survived by his wife of 25 years, Wilma, his son, Earl Arnold (Michelle), his step-sons, Doak Phillips (Kim) and Kyle Phillips (Susie), three brothers-in-law, Burlan Woods (Bethel), Doug Parker and Dwain Doyle, his nine grandchildren, Walter, Kelsey, Andrew, Alyssa, Haley (Zech), Ethan, Vince, Jacqueline (Andrew) and Louie and three great-granddaughters, Ellie, Adeline and Junie. Jim passed away on Thursday, November 4, 2021 at Cox South Hospital in Springfield, MO. Following cremation, a graveside service for family will be held at a later date. In lieu of flowers, the family requests that memorial donations be made to the charity of your choice.

The family of James "Jim" D. Arnold created this Life Tributes page to make it easy to share your memories.