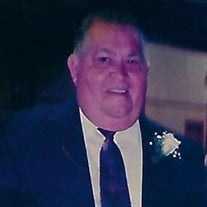 James “Jim” Kenneth Ferguson, son of the late John Monroe and Evelyn (Shelton) Ferguson, was born June 28, 1933 in Meta, Missouri. As a young boy, Jim grew up and attended school at Newburg and Arlington, Missouri. At the age of 12 at the beginning of his sixth grade year, he began attending school in Waynesville and graduated from Waynesville High School. From 1951 to 1963, Jim was a part of the Missouri Army National Guard and loved serving his country whenever he was called to do so. At the age of 18, Jim began working in the parts business at Link and then began working for NAPA Auto Parts in Waynesville and Salem. He began working as a Civil Service employee in the Adjutant General’s office in military personnel records. He retired after 30 years of service. On June 21, 1952, Jim was united in marriage to Lenna Jo Roam in St. Louis, Missouri. They shared over 67 years of marriage together and were blessed with three children: Teresa, Rhonda and Kenny. Jim enjoyed anything that had to do with car parts; so much so, that even while working on Fort Leonard Wood, he continued working for NAPA Auto Parts and continued working there even after retiring from civil service. He stayed at the parts store until his health began to decline. In his spare time, Jim loved to play a mean game of Pinochle with his family and friends. They were known to have some pretty intense games, which caused the family to have some wonderful memories. Jim also enjoyed bowling and was a member of a men’s bowling league for many years. His greatest enjoyment came from his grandchildren. He loved keeping up with all of their sporting events and even when his health began to fail, he would keep up with them through his computer or on his iPad. Jim loved his family dearly and always enjoyed spending time with them. Jim passed away Wednesday, August 28, 2019 in his home having attained the age of 86 years. He will be sadly missed, but fondly remembered by all those that knew and loved him. He leaves to cherish his memory, his wife: Lenna Jo Ferguson of Waynesville, MO; three children: Teresa McFarland of Waynesville, MO, Rhonda Cogar of Oklahoma City, OK and Kenny Ferguson (Brenda) of Washburn, MO; six grandchildren: Kristen Bench of Waynesville, MO, Jessica Zeger of Chillicothe, MO, Bryan Cogar (Ashley) of Nichols Hills, OK, Steven Cogar (Carlyn) of Mocksville, NC, Kayla Ferguson of Joplin, MO and Tyler Ferguson of Bentonville, AR; nine great grandchildren: Kourtney Barton, Kaitlyn Bench, Kaylie Bench, Taylor Bench, Grayson Anderson, Grant Cogar, Davis Cogar, Cora Cogar and Bryce Cogar; three sisters: Lois Rearrick of Waynesville, MO, Geraldean Wallace of Louisburg, MO and Shirley Roberson of Fairfax, VA; two sisters-in-law: Wanda Ferguson of Waynesville, MO and Violet Fritts of Eureka, MO; several nieces, nephews, other relatives and friends. In addition to his parents, Jim was preceded in death by two sisters: Vivian Keith and Wanda Nickels; and one brother: John Ferguson. Services were held at 11:00 a.m. Saturday, August 31, 2019 in the Memorial Chapels and Crematory of Waynesville / St. Robert with Pastor Bob Thornton officiating. The songs “Amazing Grace”, “How Great Thou Art” and “Go Rest High on that Mountain” were played. Serving as escorts were Bryan Cogar, Steven Cogar, Tyler Ferguson, Ronnie Bowling, Tommy Bowling and Bradley Roam. Serving as honorary escorts were Mark Minor, Carroll “Buzz” Hendrix and Brett Waterhouse. Burial followed in the Buckhorn Cemetery of Waynesville. Memorial contributions may be made in memory of Jim Ferguson to the Buckhorn Cemetery Fund and may be left at Memorial Chapels and Crematory of Waynesville / St. Robert.

James &#8220;Jim&#8221; Kenneth Ferguson, son of the late John Monroe and Evelyn (Shelton) Ferguson, was born June 28, 1933 in Meta, Missouri. As a young boy, Jim grew up and attended school at Newburg and Arlington, Missouri. At the age of... View Obituary & Service Information

The family of James "Jim" Kenneth Ferguson created this Life Tributes page to make it easy to share your memories.