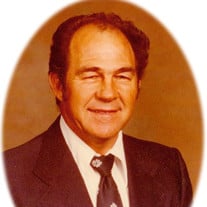 James “Jim” Edward Thompson, son of the late Charles E. and Ruth Maude Thompson, was born November 7, 1932 in Yellville, Arkansas where he grew up. He attended school in Marshall, Arkansas. Jim served faithfully his country in the United States Army before his honorable discharge. On September 15, 1955 in Salinas, California, Jim was united in marriage to Harla June Fitzpatrick and shared nearly 48 years of memories together before she preceded him in death on August 17, 2003. They were blessed with three sons: Jay Eldon, Jeffery Allen and Michael Lee. Jim dedicated his life to his family and took great pride in providing for them. For most of his working years, he owned and operated Thompson Construction. He also worked as an investment broker and real estate broker for a few years. In his spare time, Jim enjoyed being outdoors while hunting, fishing, playing golf and tennis. In his younger days, Jim was an avid boxer. He also enjoyed St. Louis Cardinal baseball, and keeping up with the stock market, world news and any current affairs. He was a 32nd degree Mason and was a member of the Waynesville Masonic Lodge #375 AF & AM. As a young man, Jim made a profession of faith and for many years, he and Harla attended the St. Robert Church of God. Jim went home to be with his Lord, Monday, May 2, 2016 in the Dixon Nursing and Rehab Center of Dixon, Missouri having attained the age of 83 years, 5 months and 25 days. He will be sadly missed, but fondly remembered by all those that knew and loved him. Jim leaves to cherish his memory, his three sons: Jay E. Thompson of Edgar Springs, MO, Jeffery Thompson (Mirnah) of Waynesville, MO and Michael Lee Thompson (Maxine) of Waynesville, MO; three grandchildren: Wyatt James Thompson, Madison Grace Thompson and Mason Isaiah Thompson; one brother: Chuck Thompson of Waynesville, MO; one sister: Sue Savage of Nixa, MO; several nieces, nephews, other relatives and friends. In addition to his parents and wife, Jim was preceded in death by three siblings, Kenneth Lee Thompson, Fred Thompson and Geneva Treat. Services were held at 10:00 a.m. Thursday, May 5, 2016 in the Memorial Chapels and Crematory of Waynesville, Missouri with Pastor William Kempen officiating. Becky Lercher sang “It Is Well With My Soul” and the song “Go Rest High on that Mountain” by Vince Gill was played. Serving as escorts were Mark Hedrick, Jimmy Wilking, Jacob Blackburn, Luke Blackburn, Brandon Bales and Mike Morris. Serving as honorary escorts were Colin Long and Doak Phillips. Burial followed in the Waynesville Memorial Park Cemetery.

The family of James "Jim" Edward Thompson created this Life Tributes page to make it easy to share your memories.