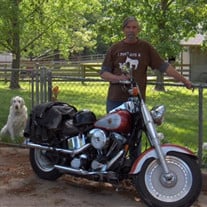 James Evan Magee, son of the late Marshall Miller and Helen L.V. (Nelson) Magee, was born June 28, 1949 in Springfield, Missouri, the family later moved into the Pulaski County area. “Jim,” as he was known as, graduated from Richland High School. He went on to further his education at SBU in Bolivar, Missouri. Jim came back home to Richland, and began working for the golf course. Jim was married to Melinda (Leep) Magee and was blessed with two precious children, Jimmy and Johnna. Jim’s hobbies included golfing, fishing, playing pool, collecting coins and guns, a stock market enthusiast, building Harley motorcycles, and his favorite was riding his Harley anywhere and everywhere. However, his treasures in this life were his friends and family, especially his grandson Evan, whom he loved and adored, and passed down his love of fishing to. Jim passed away on the morning of Sunday, March 20, 2016, in Mercy hospital of Springfield, Missouri, at the young age of 66 years. James is survived by his two children: Jimmy Magee of Lebanon, MO and Johnna Magee and her fiancé Adam Williams of Lebanon, MO; one grandson: Evan James King of Lebanon, MO; former wife and good friend, Melinda Magee of Lebanon, MO; three sisters: Susan Finney and her husband, Everett of Sebring, FL, Linnie McGlone and her husband, Tom of Flemington, NJ and Marsha Gibson and her husband Kenny of Mountain Home, AR; special friend, Lisa of Richland, MO; several nieces, nephews, other relatives and friends. He was preceded in death by his parents. Jim has left a lifetime of wonderful memories because he lived each day to its fullest. Though he is gone from our sight, his legacy will live on in the hearts and minds of those who knew and loved him. Services for Jim Magee were held at 10:00 a.m., Saturday, March 26, 2016 in the Memorial Chapel of Richland with Bro. Ray Woodall officiating. Favorite music recordings included, “Born Free,” “On the Road Again,” “Ole Hippie,” and “Born to Be Wild.” Serving as escorts were Adam Williams, Steve Hooker, Bill Burd, Chad Burke, Jerry Sanders, Trevor West and Ron Leep. Burial followed in the Oaklawn Cemetery of Richland, Missouri. Services were under the direction of Memorial Chapel of Richland. Memorial contributions may be made in memory of James Evan Magee for his grandson, Evan James King’s college education fund and may be left at the Memorial Chapel of Richland funeral home.

James Evan Magee, son of the late Marshall Miller and Helen L.V. (Nelson) Magee, was born June 28, 1949 in Springfield, Missouri, the family later moved into the Pulaski County area. &#8220;Jim,&#8221; as he was known as, graduated from... View Obituary & Service Information

The family of James Evan "Jim" Magee created this Life Tributes page to make it easy to share your memories.