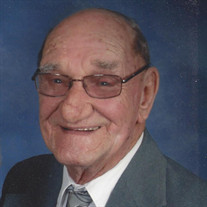 James W. Matthews was born March 19, 1929 in New Castle, Pennsylvania. He was the youngest of four children born to the union of the late James Stephen Matthews and Mary Elizabeth (Janscar) Matthews. At the age of 12, James quit school to help provide for his family when his father passed away (later in life, he earned his high school diploma through a GED). At the age of 15, he worked at a dynamite plant and then did odd jobs until he was drafted into the United States Army at the age of 18. He was immediately sent to Japan with the 1/24th Infantry Battalion, a group of 600 soldiers and only 100 of them survived. James saw the destruction of Hiroshima and was within 30 days of discharge when they were sent home. For his faithful service, James received the World War II Victory Medal and the Army of Occupation Medal-Japan. James returned to Pennsylvania where he met Marie Reno. They were united in marriage on November 20, 1948 and shared over 71 years of marriage together and were blessed with four sons. Work was difficult to find, so James, along with his family, drove a Packard to California where he got a job as an assemblyman with the Chrysler Company. He saved his money and later moved the family to Oxnard, California where he got a job with the United States Postal Service. He spent the next 32 years with the postal service and retired in 1988. James and Marie came to Missouri where their son was stationed, so they could help care for their granddaughter. In his spare time, James enjoyed woodworking, especially working with a lathe and he also enjoyed gold prospecting when they still lived in California. He was a member of the VFW Post 470 of Plato, Missouri. James passed away Sunday, November 15, 2020, in his home at Plato having attained the age of 91 years. He will be sadly missed, but fondly remembered by all those that knew and loved him. James leaves to cherish his memory, his wife Marie; two sons, David Matthews (Anita) of Plato, MO, and Bill Matthews (Gloria) of Oklahoma City, OK; nine grandchildren and several great-grandchildren; a number of nieces and nephews; as well as a host of other relatives and friends. In addition to his parents, James was preceded in death by three sisters and two sons. Services were held at 11:00 a.m. Thursday, November 19, 2020 in the Faith Evangelical Lutheran Church of St. Robert, Missouri with Pastor John Perling officiating. Serving as escorts were family and friends. Burial with military honors followed in the Missouri Veterans Cemetery of Waynesville with military honors being provided by the Missouri Honors Team. Services were under the direction of Memorial Chapels and Crematory of Waynesville / St. Robert.

James W. Matthews was born March 19, 1929 in New Castle, Pennsylvania. He was the youngest of four children born to the union of the late James Stephen Matthews and Mary Elizabeth (Janscar) Matthews. At the age of 12, James quit school... View Obituary & Service Information

The family of James Worthy Matthews created this Life Tributes page to make it easy to share your memories.