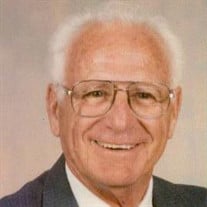 Rev. James Edward Routh, son of the late Charlie Edward and Beatrice Ollie (Robertson) Routh, was born October 5, 1921 in Crocker, Missouri. At an early age, James made an important decision in his life and accepted Jesus Christ as his Savior and was baptized. This decision would affect the rest of his life. James grew up in Crocker, Missouri where he graduated from high school. While in high school, James met the love of his life, a fellow classmate by the name of Alfreda Pearl Helms. They were united in marriage on July 26, 1942 and were blessed with three children: Jimmy, Phyllis and David. Alfreda preceded him in death on February 14, 2015. Immediately after their marriage, James was drafted into the United States Army Air Corp to serve during World War II. After his honorable discharge from the military, James attended Central Bible College in Springfield, Missouri and upon his graduation became an ordained minister of the Gospel. James’ first pastorate was in Morrisville, Missouri. He would later found and pastor the St. Robert Assembly of God Church for 32 years. He also pastored in Crocker, Rolla, St. Louis, and Richland, Missouri and also in Blytheville and Corning, Arkansas. He also served in multiple leadership positions with the Assembly of God District wherever he was pastoring at the time. In his spare time, James liked being outdoors while fishing, gardening or just enjoying God’s creation. He and Alfreda enjoyed traveling together and he loved to preach revivals at different churches in Missouri, Oklahoma and Arkansas. James went home to be with his Lord and be reunited with Alfreda, on Wednesday, November 8, 2017, in his son’s (David Routh) home in Guntersville, Alabama. He had attained the age of 96 years. He will be sadly missed, but fondly remembered by all those that knew and loved him. James leaves to cherish his memory, his three children, Jimmy Routh (Linda) of Dixon, MO, David Routh (Shirley) of Guntersville, AL, and Phyllis Fritzel (Robert) of Guntersville, AL; six grandchildren, Christopher Routh, Daren Routh, Janice Rujawitz, Jennifer Bailey, Robin Smiley and Wendy Holcombe; fifteen great-grandchildren; his brother, Donald Routh of Brumley, MO; a number of nieces and nephews; as well as a host of other relatives and friends. In addition to his parents and wife, James was preceded in death by three sisters: Lucille Gay, Geneva Lantham and Lena Overby. Services were held at 12:00 p.m. Tuesday, November 14, 2017 in the First Assembly of God in Crocker, Missouri with Rev. Danny Kemp officiating. Heather Routh sang “Dancing in the Sky”, Becky Lercher sang “Because He Lives” and “Amazing Grace” and the songs “Look For Me” and “I Will Pilot Thee” were played. Serving as escorts were Joey Rujawitz, Chris Routh, Daren Routh, Hunter Routh, George Smiley and Anthony Routh. Serving as honorary escorts were Don Routh, Jr. and Mark Routh. Rev. Jack Embree presented the Christian flag to the family for Rev. Routh’s faithful service of preaching the Gospel. Burial with military honors followed in the Missouri Veterans Cemetery of Waynesville. Military honors were provided by the Missouri Honors Team. Services were under the direction of Memorial Chapels and Crematory of Waynesville / St. Robert. A memorial has been established in memory of Rev. James Routh to the Assembly of God Church, and contributions may be left at the funeral home.

Rev. James Edward Routh, son of the late Charlie Edward and Beatrice Ollie (Robertson) Routh, was born October 5, 1921 in Crocker, Missouri. At an early age, James made an important decision in his life and accepted Jesus Christ as his... View Obituary & Service Information

The family of Rev. James Edward Routh created this Life Tributes page to make it easy to share your memories.