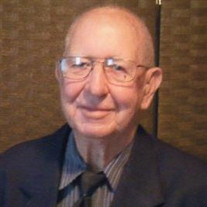 James Richard Shockley of Richland, Missouri, was called home to the Lord on Friday, March 22, 2019. Richard was born on January 26, 1932, to Roy Richard Shockley and Cora Ruth Welch Shockley in Bland, Missouri. He and his family later moved to Richland in the 1940s. Richard graduated from Richland High School in 1949, took a job in Lebanon, Missouri where he met and married Betty Ruth Winfrey in 1951. They were the very first couple to be married in the brand new First Baptist Church on Pine Street. He was drafted into the US Army and in 1952 was deployed to Korea during the Korean War. While there, his first child was born. Richard was blessed with four more children during his 61 year marriage to Betty. Beginning in the 1960s, they became foster parents to a total of 62 different children over the years, one of which stayed with them from age 2 to age 35. Richard served in and retired as a First Sergeant from the Missouri National Guard in the 1970s. Richard was a Christian and raised his family in the First Baptist Church. He was an active member of the Lion’s Club for many years. He could always be seen volunteering at the Tri-County Fair “Turkey BBQ” and their pancake breakfasts. He served as a volunteer fireman and was always the man to call if you needed your furnace fixed. He did all this in his community while also employed with Caldwell Oil Company for 40+ years, first as a service station attendant, then as a mechanic and finally as their bookkeeper. He enjoyed sports, especially the St. Louis Cardinals baseball team. Upon retirement, he continued to serve his community as a volunteer to deliver Meals on Wheels out of the Senior Center. This is where he met Ruth Mandrell who also volunteered at the Center and they were married in 2006. Richard was preceded in death by his parents, his wife Betty and oldest daughter Paula Shockley Adkison. He is survived by his wife of 13 years Ruth; his children Donna Nye (Ronnie) of Floresville, TX; Tom Shockley (Sue) of Broken Arrow, OK; Jim Shockley (Mary) of Crocker, MO, and Susie Doughty of Centennial, CO; his five grandchildren, Benjamin Nye, Alicia Nye, Daniella Mercer (Mark), Joshua Shockley (Heather), Megan Vatole (Kyle), Katie Uherka (Erryck) and Adam Shockley; his three great grandchildren, Nolan Mercer, Howard Mercer and Amelia Vatole; his brother Edward Roland Shockley (Phyllis) of Denver, CO; a special cousin Charles Schuenemeyer (Carolyn) of Lebanon, MO and countless nieces, nephews and friends. Services were held at 11:00 a.m., Tuesday, March 26, 2019 in the Memorial Chapel of Richland with Brother Fred Bobe officiating. Favorite recorded music included, “His Eye Is on The Sparrow,” “The Old Rugged Cross” and “Look for Me at Jesus` Feet.” Serving as escorts, was the United States Army. Burial with Military Honors followed in the Oaklawn Cemetery, Richland, Missouri. Services were under the direction of Memorial Chapel of Richland. Memorial contributions may be made in memory of James “Richard’ Shockley and may be left at the Memorial Chapel of Richland.

The family of SFC (Ret) James "Richard" Shockley created this Life Tributes page to make it easy to share your memories.