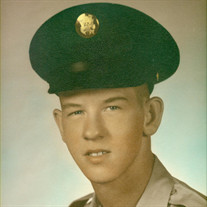 James Terry Snider, son of the late James Cornel Snider and Wilma (McGregor) Monks, was born April 3, 1950 in St. Louis, Missouri where he grew up and graduated from high school. In 1967, James entered the United States Army and served his country faithfully until his honorable discharge in 1970. He had attained the rank of Specialist 4 and earned the National Defense Service Medal, Vietnam Service Medal and Vietnam Campaign Medal. After his discharge, James came to Waynesville where remained. On November 6, 2004, James was united in marriage to Francine Marie Bastean in Waynesville, Missouri. They shared 12 years of marriage together and many wonderful memories. After moving to the Waynesville area, James worked with Melvin Hensley as a landscaper. He also worked for a time in maintenance at Brookview Apartments in Waynesville, Abbott Insulation and as an independent logger. In his spare time, James loved to be outdoors. You could find him out fishing or going to the I-44 Racetrack in Lebanon to enjoy a good race. He was also very talented when it came to woodworking. Most importantly, he loved spending time with his children and grandchildren. James passed away Saturday, April 22, 2017, in his home in Waynesville, Missouri having attained the age of 67 years. He will be sadly missed, but fondly remembered by all those that knew and loved him. James leaves to cherish his memory his wife, Francine of the home; two daughters, Christy Williams (Carlton) of Macomb, MI, and Angie Arroyo (David) of Deltona, FL; his step-son, Shawn Gregory of Waynesville, MO; two step-daughters, Tanya Gregory and Bobbie Jo Gregory, both of Waynesville, MO; thirteen grandchildren: Anthony (Tierra), Austin, Justin, Melissa, Taniya, Tavontaye, Addison, Sadie, Stoney, Aliyah, Lil Shawn, Natheinal, Kaylee Dawn; a great-granddaughter: Ava; his sister, Barbara Yancheck of Jackson, MO; nieces: Melissa Vancheck and Jennifer Eifert; as well as a host of other relatives and friends. In addition to his parents, James was preceded in death by one sister, Betty Fletcher. Services were held at 1:00 p.m. Friday, April 28, 2017 in the Memorial Chapels and Crematory of Waynesville / St. Robert with Rev. Danny Graves officiating. The songs “Butterfly Kisses” and “You Are So Beautiful” were played. Soloist Becky Lercher sang “Amazing Grace”. Serving as escorts were Carlton Williams, Bobbie Malcom, David Kempt, Lance Rotramel, Steven Bondoni, Michelle Pero, Lance D. Rotramel and Mike Kuhres. Burial with military honors followed in the Missouri Veterans Cemetery of Waynesville. Military honors were provided by the Missouri Honors Team. A celebration of life gathering will be held at 3:00 p.m. Saturday, April 29, 2017 in the VFW of St. Robert. Memorial contributions may be made in memory of James Snider and may be left at the funeral home.

James Terry Snider, son of the late James Cornel Snider and Wilma (McGregor) Monks, was born April 3, 1950 in St. Louis, Missouri where he grew up and graduated from high school. In 1967, James entered the United States Army and served... View Obituary & Service Information

The family of James Terry Snider created this Life Tributes page to make it easy to share your memories.