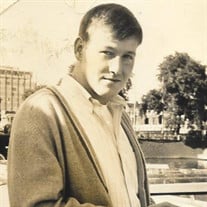 James “Jim” Verle West, son of the late Roy Verle and Bertha (Byers) West, was born March 12, 1948 in Hooker, Missouri. As a young man, Jim entered the United States Army and served his country faithfully until his honorable discharge. He served during the Vietnam War and for his faithful service Jim received the National Defense Service Medal, Vietnam Service Medal, Vietnam Campaign Medal, Two Overseas Bars, and the Sharpshooter M-14 and Marksman M-16 Ribbons. Jim was a hardworking man. His longest running job was with C.A.S. Construction. He was a heavy equipment operator for many years working in Waynesville, St. Robert, and on Ft. Leonard Wood, along with some work he did in other states. Jim was a generous man and was always willing to help everyone in the Elbow if they needed a hand. In his spare time, he enjoyed the Jeep Club in his younger years and spending time on the Big Piney fishing and camping. He also enjoyed working on vehicles. Jim passed away at 3:52 p.m. Friday, September 5, 2014 in the Rolla Manor Care Center of Rolla, Missouri having attained the age of 66 years, 5 months and 24 days. Jim is survived by his two children: Julia West of the state of Texas and James West and wife Misty of the state of Kansas; three grandchildren: Bethany West, Jace and Colt West; one brother: Larry West and wife Eula of Devil’s Elbow, MO; one sister: Judy Ellis and husband Bob of the state of Indiana; niece, nephews, other relatives and friends. Services were held at 6:00 p.m. Thursday, September 11, 2014 in the Memorial Chapels and Crematory of Waynesville / St. Robert with Rev. Christopher Hendrix officiating. Rev. Hendrix read a letter from Jim’s children, Julia and James who were not able to attend the memorial service. Angie West Dake recalled her memories of her Uncle Jim. The songs “Go Rest High on that Mountain” and “We Believe” were played. Private inurnment with military honors will be held in the Missouri Veterans Cemetery of Waynesville, Missouri. In lieu of flowers, memorial contributions may be made in memory of Jim West to the Wounded Warrior Foundation and may be left at the funeral home.

The family of James Verle West created this Life Tributes page to make it easy to share your memories.